Fun fact: The Spanish rice dish ‘Paella’ takes its name from the pan it is cooked in, which in turn comes from the Latin word for ‘pan’ or ‘dish.’

I read my Hemmingway, and so, of course, I had heard of Paella, but, to tell you the truth, the first time in my life I tried it, it came as a big disappointment to me. It was half a lifetime ago at a friend's house in Germany. She had brought back a pack of ready-mixed spices from her holidays somewhere on the Spanish coast, and so she lit a cooking fire in her garden, set an old frying pan on the grill and on this improvised hearth burnt some orange-coloured rice with the odd frozen shrimp in it. We needed a lot of Sangria to wash it down.

You can imagine I was not overly enthusiastic when, years later, Mallorquin friends invited me to their paella party in their Calvia garden. But, what a difference! They had a friend from Bilbao staying at their house who had won several Paella championships on the Spanish mainland. He certainly knew what he was doing. This time, I was in for one of the most delicious meals in my life – and what was best: he let me in on his secrets and showed me how to prepare a great paella, step by step.

Mind you – there are many different recipes, and there is a big controversy going on of whether to put in tomato or not, onion or not, garlic or not. And some might say, you should have gotten your recipe from Valencia, that's where you find the rice paddies with the authentic arroz de paella. But then, there are many ways to build a bridge, the main thing is it holds… And what a lovely meal you'll get once you have crossed it. 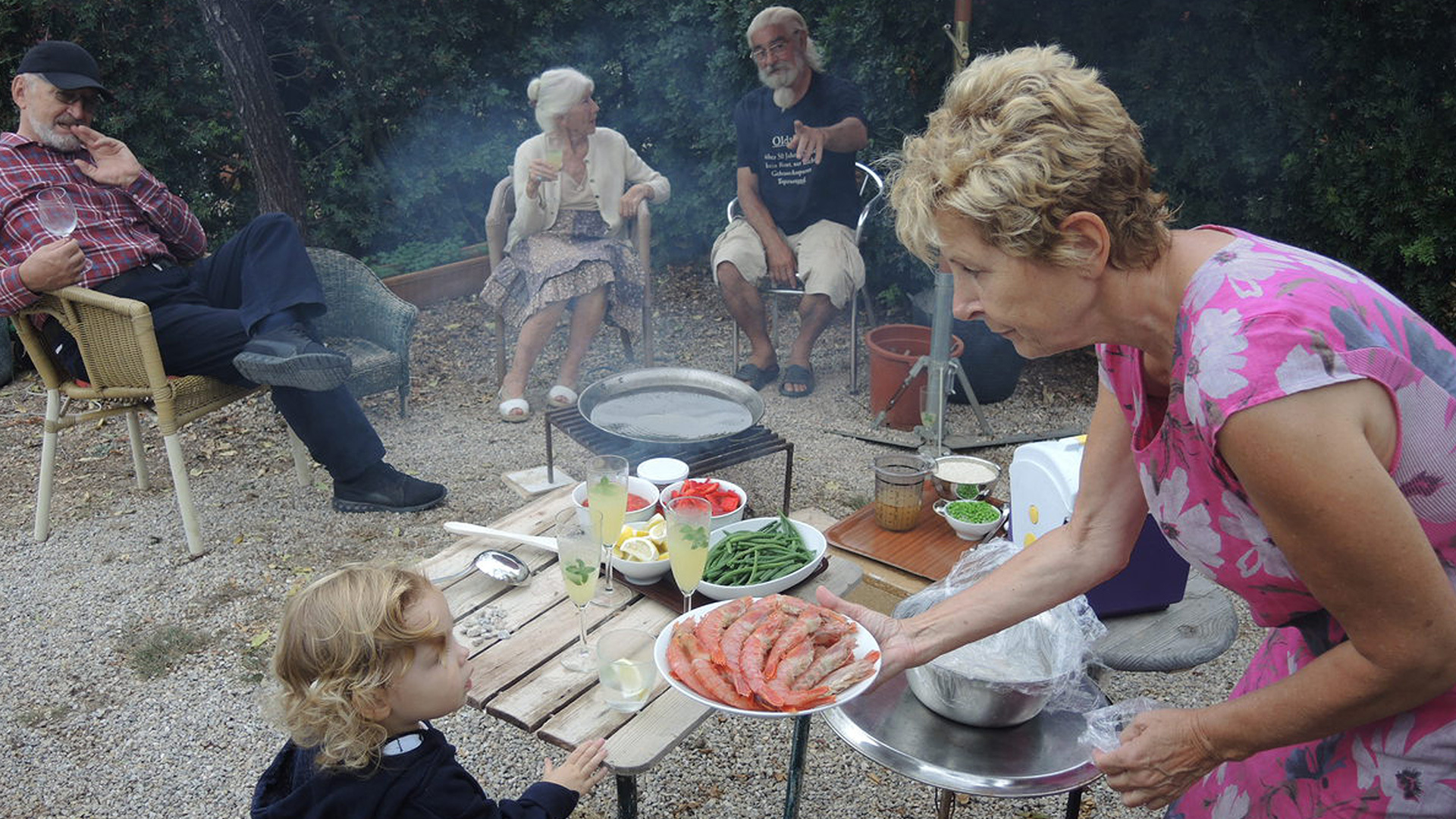 What I am going to teach you here is a seafood paella, but once you've got the knack of it you can try your hand on other traditional variations. Depending on where in Spain it's served – on the coast or inland -, the ingredients can differ. Originally, people used what was available to them and in season: pork and chicken, rabbit, or a mix of meat and seafood with a combination of different vegetables, artichokes being a favourite. Or, why not try an altogether vegetarian paella using mushrooms and green asparagus, for example.

Although many restaurants nowadays serve paella seven days a week for lunch or dinner, the typical thing is to prepare a paella for lunch on Sundays or public holidays – an occasion where the whole family and/or a circle of friends come together to enjoy the food as much as the company. This makes it a perfect party for the cooler seasons when the chill and damp of Mallorquin evenings drive people indoors and to have a dinner party out on the terrace suddenly doesn't seem such a good idea any longer.

Setting the Stage for Your Party #

At our party, we were 12 people of all ages from little Marlene (20 months) to Greta (92 years). The Paella pan (paellera) we used is big enough to serve 16. You can get pans of different sizes at your local market or ferreteria. It's always better to choose a pan that is a bit bigger than needed for the actual number of people. There are enamelled ones which do not rust and are easier to clean, but I personally prefer the plain iron ones, maybe because they feel more authentic. I soak them in water after the meal, clean them the next morning (not touching the bottom, but leaving it black from the fire) and wipe the inside off with a bit of olive oil to prevent it from rusting.

You have two choices. No matter which method you use, make sure to choose a place sheltered from the wind.

A paella is teamwork. To do to it all on your own would be pretty stressful. So, let everybody join in the fun and help: while some lay the table, others help chopping the veg or serve the drinks. Make sure you have an assistant at your side to watch over and feed the fire, to run to the kitchen to fetch things you might have forgotten and to help you carry the pan to the table – in short, what you need is a good right hand (or many of them). Should somebody like our little Marlene be around you have to watch the pot with the broth though – she would have drunk it all before we had even started. 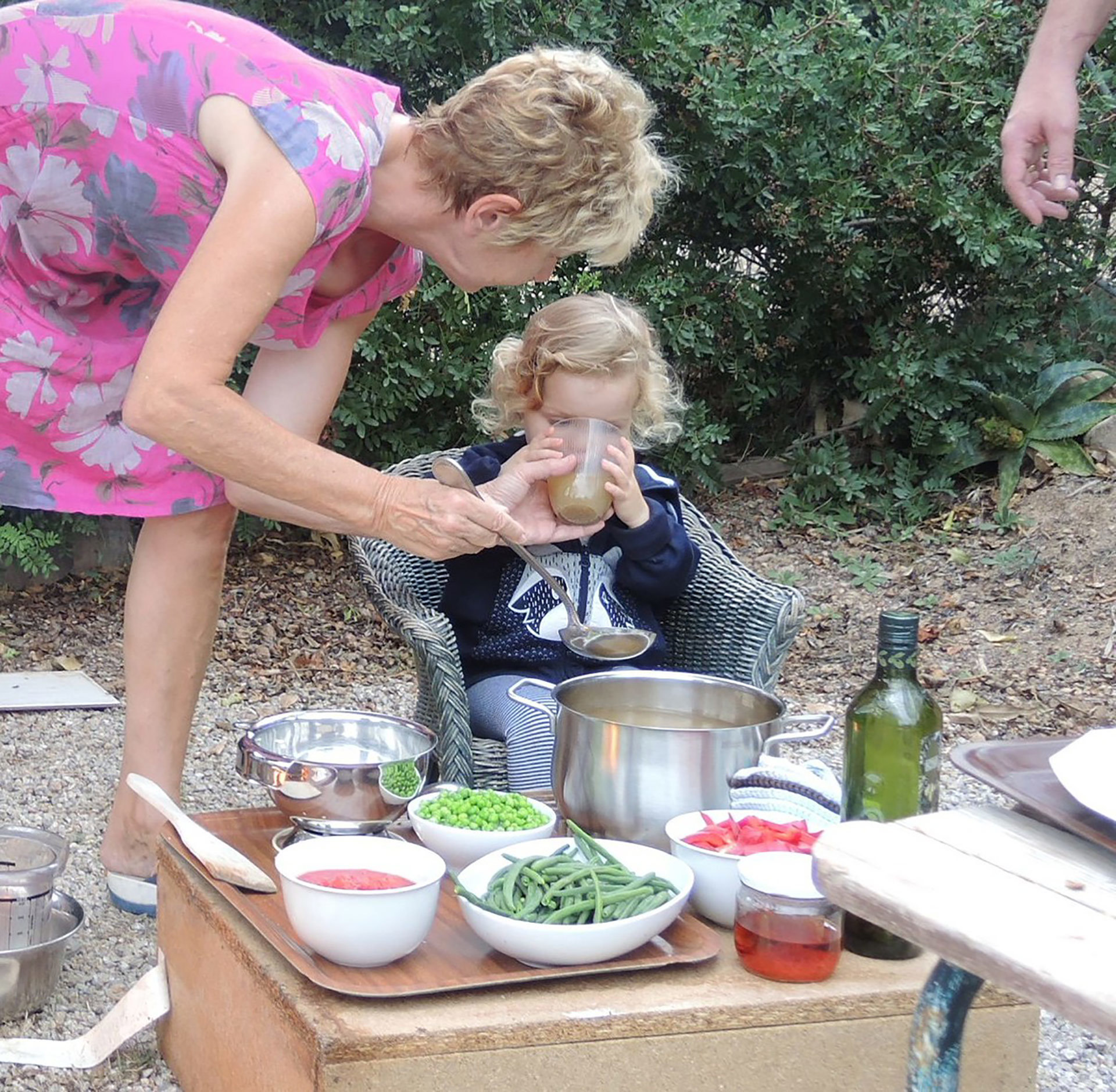 Next to the fire, stet up a low table big enough to hold the ingredients for your paella. You need to have everything handy once you've put the pan on the fire. Have a spatula and a soup ladle (for the stock) ready on your workplace. And oven gloves to carry the pan to the table.

To cook a Paella is a ritual. To watch it happen is half the fun. Make sure everybody has a place to sit around the fire and see what's going on – blocks of sandstone, logs of wood or just plain chairs, the main thing is everybody is comfortable. It's a good idea at this point to serve a round of drinks (click here for non-alcoholic choices>>) and something to nibble on to keep stomachs from rumbling during the preparation ceremony. 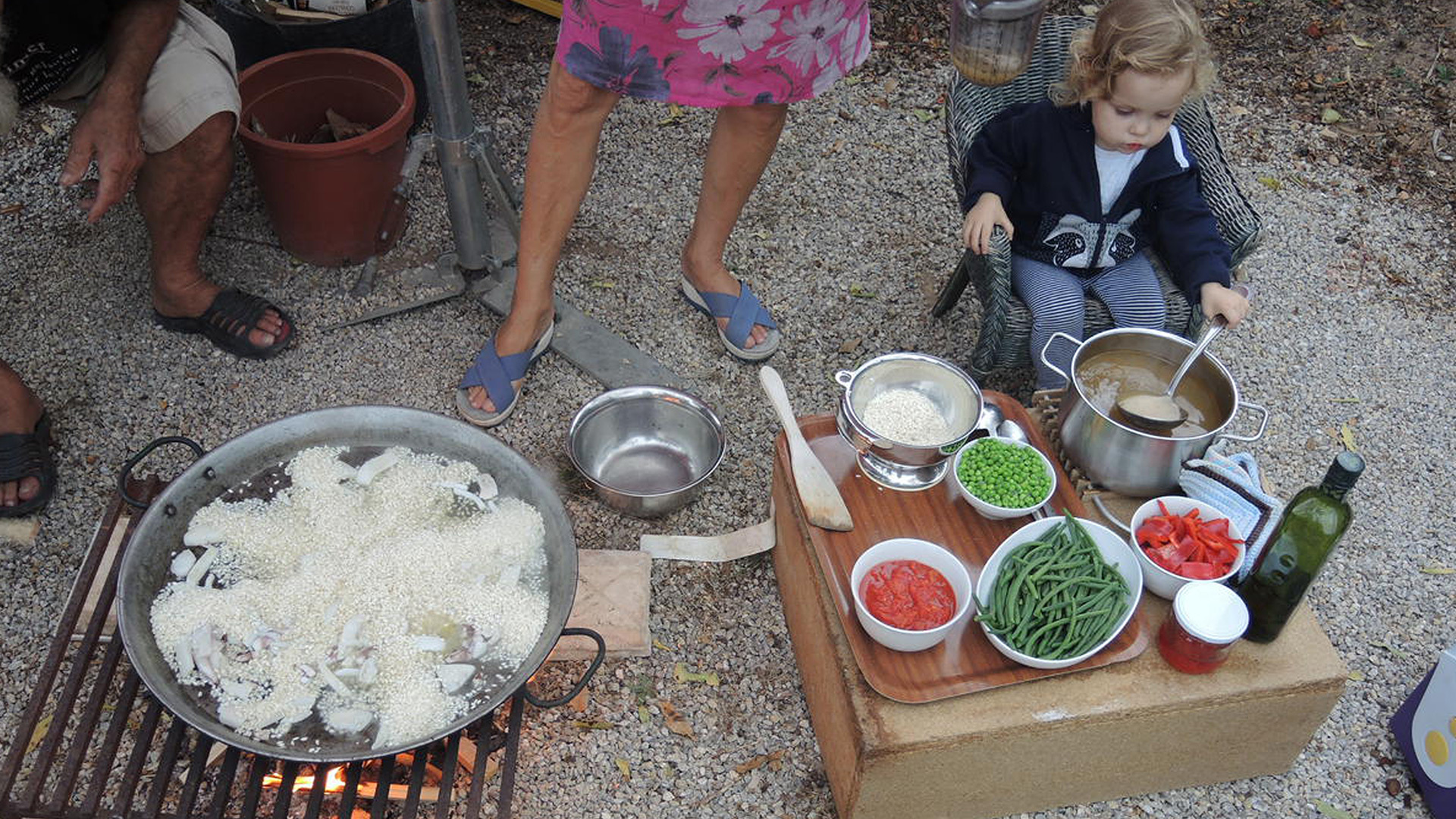 Yes, I know – you can buy paella stock in a tetra pack at any Spanish supermarket. BUT. If you ask me, a good homemade paella stock is the key to success. The day before your party, in 2 to 2 ½ litres of water, boil a handful of coarsely chopped carrots, ¼ head of celery root, (an onion, if you wish) and a laurel leaf. When buying the seafood for your paella (see below), get half a kilo of pescado de sopa (little red fish that look a bit like salmonetes) or ask your fish dealer for a few fish heads. Put those in with your broth and let it all simmer for at least half an hour. Season with salt and pepper. (I chuck in a teaspoon of chilli flakes, too, which gives it a little edge of picante.) Then let it rest over night. More ingredients will be added the next morning (see below). Bring to the boil and strain before starting your paella. You will need two cups for every one cup of rice you use.

For the 12 people we served, I bought 2 sepias (cleaned), 1 kilo of big raw shrimps in their shells (gambónes) and 1 net of big mussels (mejillones gordos). Cut off the eyes of the sepias (they go in the broth) and dice the flesh, carefully clean the shrimps removing all the hairs and legs (fry two or three of the shrimps and the discarded bits in olive oil until crisp, deglaze with a cup of your broth and pour the mixture through a strainer – it all goes back into the stock to add extra flavor.) Brush the mussels under cold water and, at the last moment, remove the beards. Once you've done that, you need to keep them on ice or they'll turn bad! Never use any mussels with broken shells or ones that are already open.

You can buy saffron as a powder (don't) or use the filaments. You need one sachet of those. Put them in a bowl, pour ¼ cup of boiling water over them and let them steep.

1 cup of paella rice per 2 persons
1 cup of frozen peas
1 can of chopped tomatoes (tomate triturado)
2 handfuls of green beans (ends and threads removed, boiled 'al dente' in some of your broth; pour the broth back into the pot afterwards!)
1 red pepper (cut in fine strips)
2 lemons cut in pieces to serve with the paella (I serve them in a separate dish for people to help themselves, but you could also put them on the paella as a garnish…)

That's it. Oh, and a bit of olive oil for the pan. Plus, some sheets of strong paper big enough to cover the pan after your paella is cooked during the time it needs to rest. (People used to use a newspaper for it, which I don't recommend because of the toxins in the ink.) 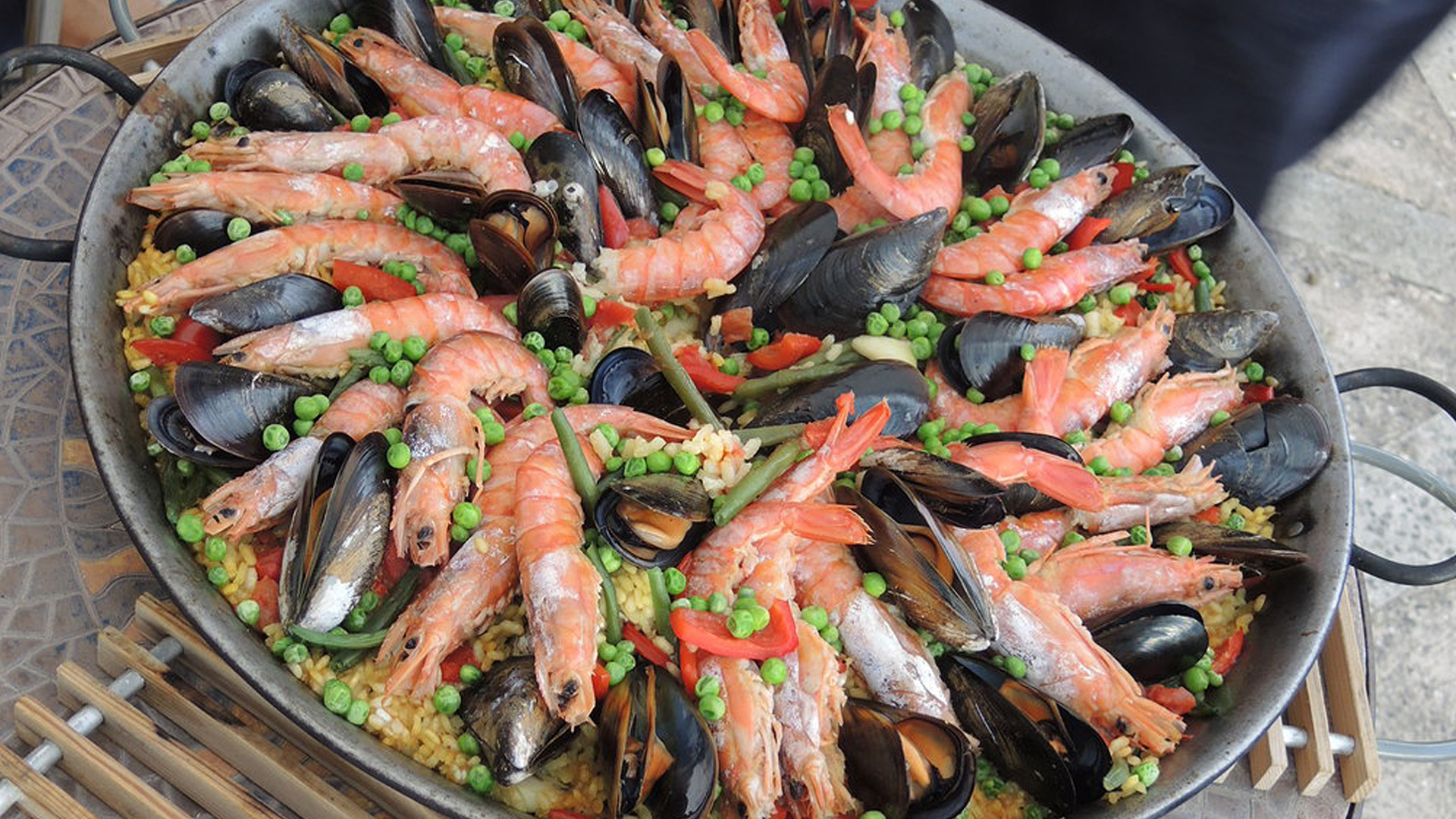 Be patient. Now your paella needs to rest for a little while. Cover the pan with the sheets of paper prepared, and let it sit while your guests move over to the table, which is nicely laid, pour them a fresh drink and then serve.

You can be sure that not a grain of rice and not a morsel of seafood or veg will be left in the pan.

Affordable Mallorca Warning: Don't forget to extinguish the fire once your paella is done!