In fine, the truffle is the very diamond of gastronomy. ~ Jean Anthelme Brillat-Savarin

“A truffle is the fruiting body of a subterranean ascomycete fungus, predominantly one of the many species of the genus tuber.” This super unsexy definition is the complete opposite of the emotion evoked by lovers of this rare and rather finicky luxury food. Though often spoken of as a mushroom, truffles are not technically so, as they grow underground, and mushrooms are above ground dwellers.

Spain has by and large dismissed the truffle in cuisine and culture, leaving that particular fancy to the French. But in recent years, a combination of a steep decline in truffle production in France, and a growing interest by Spanish chefs has turned this once neglected crop into a booming market and a treat enjoyed in the autumn and early winter months. 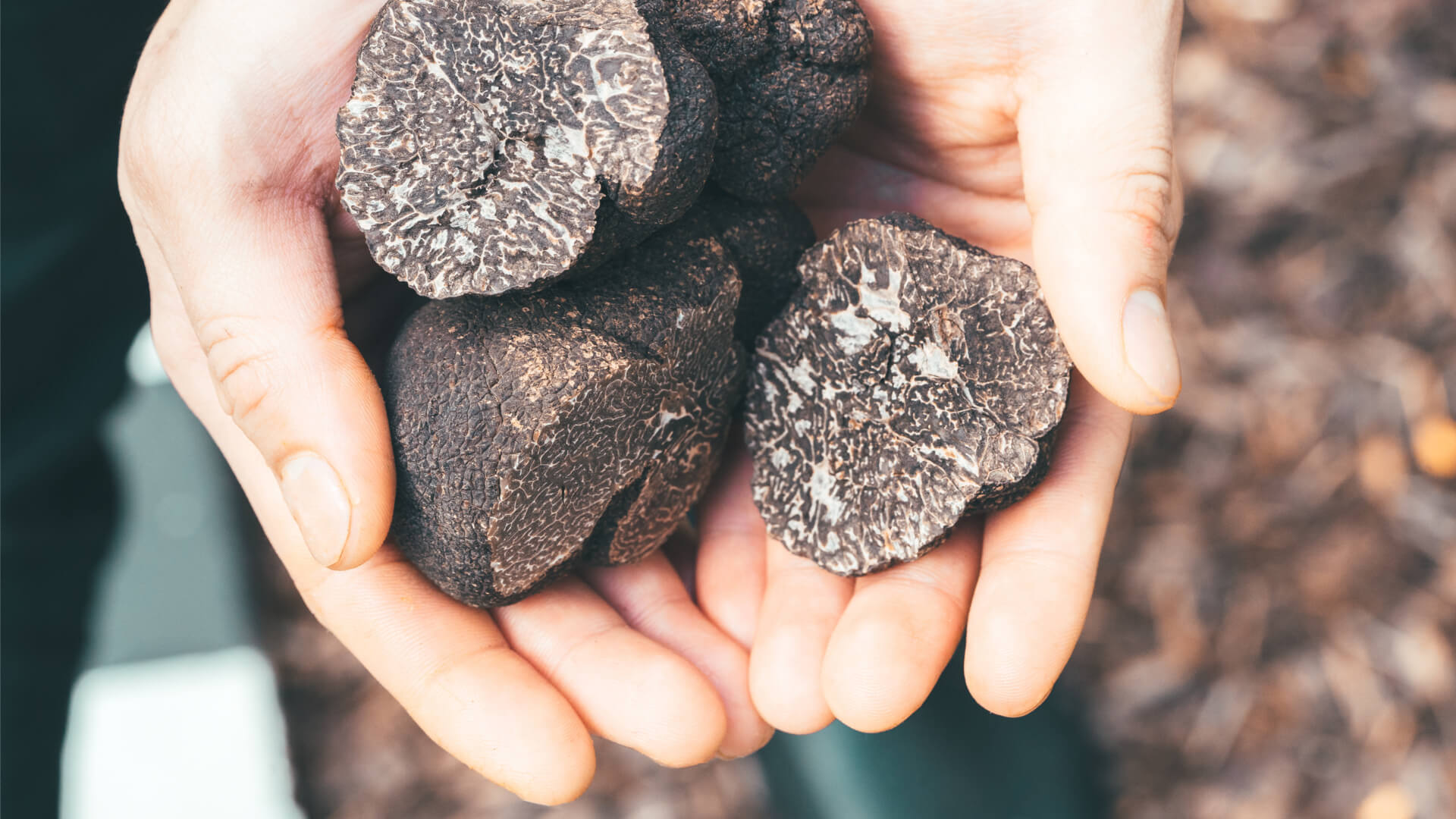 Mallorca’s native version of the truffle is the black summer truffle, or Tuber aestivum. This varietal is found all over Europe and has a mild aroma and a pale hazel-coloured interior. The elusive tuber is picky, and only grows under certain trees, namely holm oak, hazel, beech, birch, poplar and pine. Spores from the truffles form a sort of relationship with the roots of selected trees, giving the fungi needed carbs whilst providing nutrients to the trees. The nature of this kind of growing is haphazard at best and means that finding truffles in nature is rather like finding a needle in a haystack.

Traditionally they have been, literally, sniffed out by either pigs or dogs, who have highly developed senses of smell. Dogs are used mostly today because it is much harder to pry a truffle from the jaws of a 150kg pig than from man’s best friend.

Cultivating truffles is not impossible and has been successfully done since the early 19th century, but it is a long arduous process and not for those without patience. The process itself is basic enough. In the wild, one could have a dozen identical trees and only one would produce a prize. When purposefully growing them, a few tricks can help better the odds of spores reaching the most trees possible in a given area. This is done by growing trees with fast-growing root systems between the oak and hazel trees, so the spores are spread quicker. Soil is also a factor. Truffles like rich, virgin soil, and will not grow in soil that has already been “used”.

Where to Find Them #

So now that we’ve established it’s a real chore to find or grow truffles, what can we do to track them down here?

Well, unless your superpower is a sense of smell equal to or beyond that of a trained truffle hunting dog or pig, the easiest way is to visit certain inland local markets, as well as the big Palma ones such as Mercat de l’Olivar and the Mercat de Santa Catalina in autumn, where they will be proudly displayed in baskets by vendors who sport Cheshire Cat grins, knowing they have black gold on display. 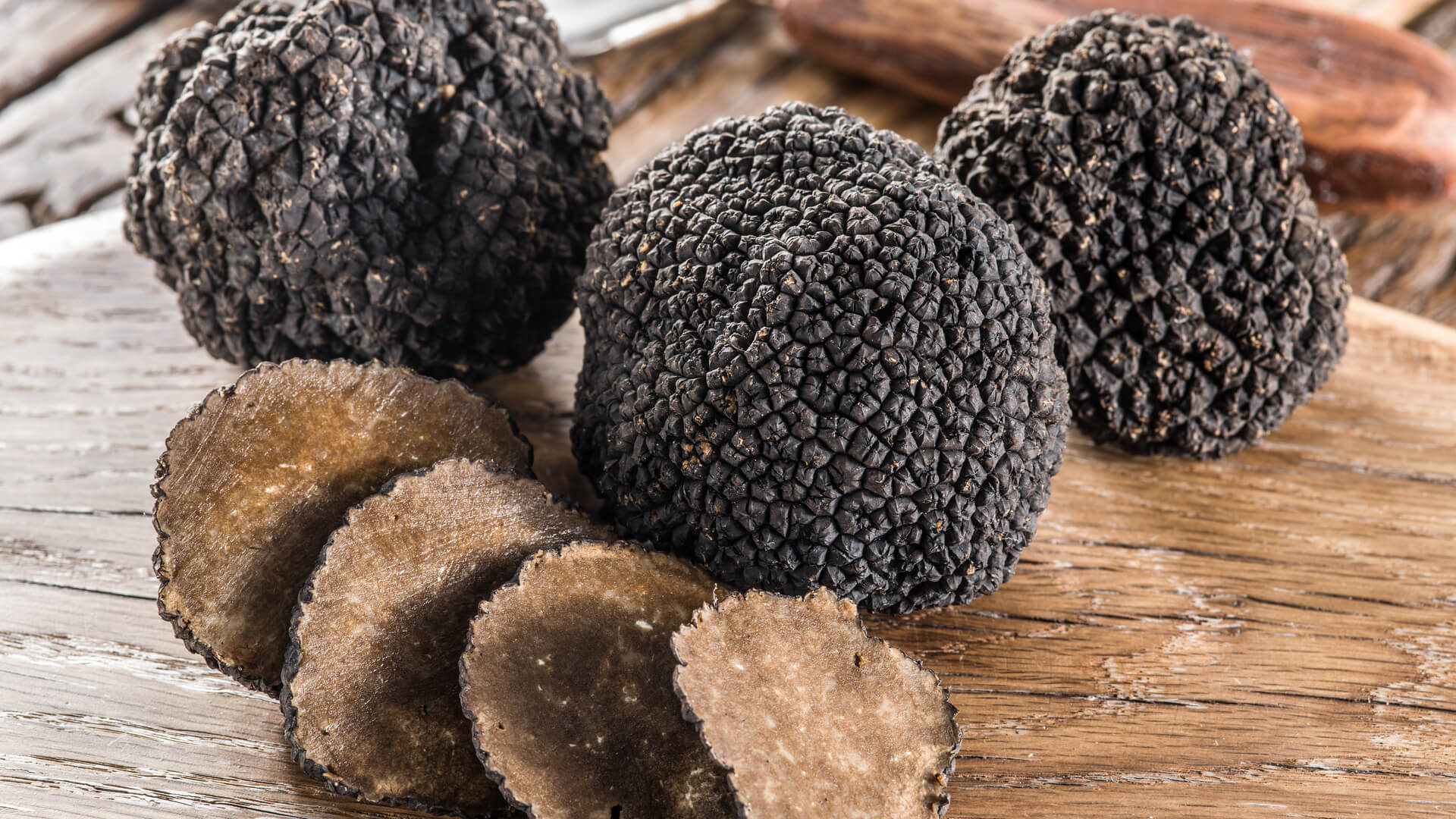 The price for a kilo of truffles runs roughly €550. But a kilo is a heck of a lot of truffles, so when pared down from heroic quantities to a more human scale, it won’t break the bank to buy a small amount, especially as with truffles, a little goes a LONG way. You only need 15 grams for a pasta dish that serves six people. That makes €8.25 - not a lot of money for a very delicious meal …

Then there is Jaime Roselló, an Inca based truffle farmer, who supplies much of the island with his local truffles. From his 30,000 square metre ranch, and with the help of 25 dogs, he not only sells his to top restaurants, but he produces truffle infused oils, meats and cheeses, as well. At present, he doesn’t sell direct to the public, but his products can be sampled at many local restaurants such as Predi Son Jaumell in lovely Capdepera.

VIP Services Mallorca also offers a truffle hunting tour for €350, but this is out of reach for many of us, so we give a thumbs down on the affordability scale.

How to Eat Them #

Before we jump right into the good part, a few things to note. Truffles lose their aroma once cut rather quickly and once the smell is gone, so is our love for them. But there are ways to prolong the aromatic qualities that will give them a vastly longer shelf life.

Truffles can be used in cooking in many ways. Some of the most popular are to use a small amount chopped finely in a light olive oil based sauce over pasta, grated over risotto, in omelettes, or my favourite way, cleaned and sliced thinly on a piece of salted buttered toast. Heaven!

People infuse small morsels in oil or butter then cook with them to give that rich, earthy taste to ordinary dishes. We used to put a half dozen eggs in a container with a small piece of truffle and let it sit for a week. The eggs absorbed the truffle essence and when cooked, they tasted as if we’d used whole pieces. We actually drank fizz with them as an additional treat!

The best thing to remember though is that, as stated above, a little goes a long way. Eating luxuriously doesn’t have to break the bank. So, go ahead, live a little! Indulge!