Beat the jellyfish! You don't even have to dip your toes in for this (well, almost).

Wildly popular, easy to learn and a fun way to get fit, paddle boarding is a sport for everyone. Join us to find out where to get in on the wave!

SUP, or stand up paddle boarding, isn’t new. It’s been around since roughly 1,000 BC, practiced in some form by cultures from South America, Africa and Polynesia as a way to travel, fish, or simply ride the waves. It was practical, an inexpensive option compared to building and maintaining a boat, and a no-brainer for cultures whose worlds centred on the sea.

The modern form we know today didn’t really come into its own until the 1960’s when Hawaiian surf instructors started paddle boarding as a way to stand on their boards during incoming swells, not only to get a better view of waves, but also to ensure their students were doing ok. By the 1990’s, surfers and surf schools had made a habit of practicing SUP on days when the waves weren’t cooperating and there was little to no swell. Soon after, classes were offered specifically catering to the growing number of people interested in the sport on its own.

And so began a trend that has spread around the globe, hooking in young and old, and becoming one of the world’s most popular sports. 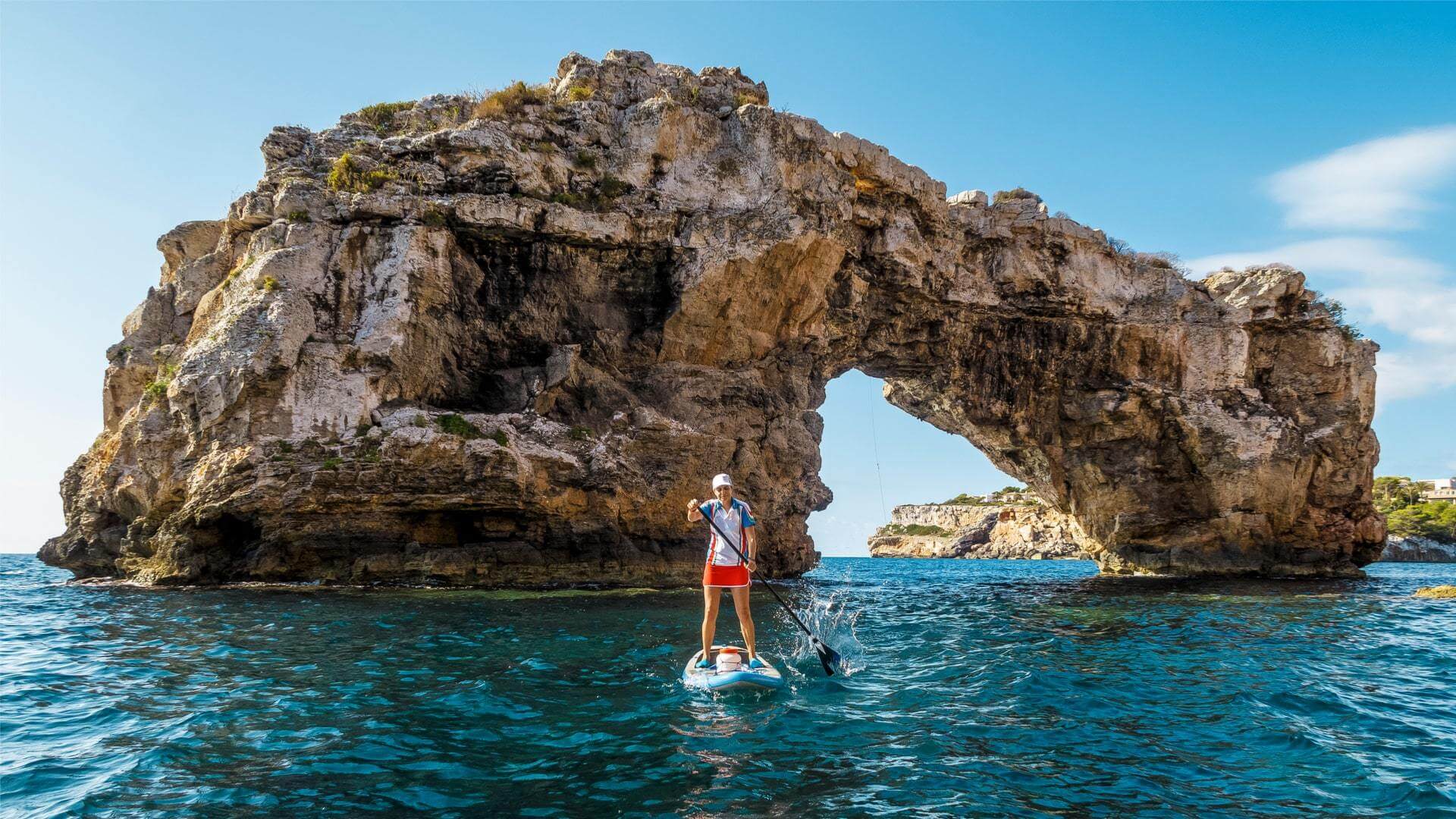 My first experience paddle boarding was when living in the South of France. The Med proved a great place to practice balance in a relatively wave-free environment. When we moved to the Caribbean, we decided to buy boards of our own, as the climate and water temps were heavenly year round for water sports. This is when it got serious.

My husband and I would go out most mornings after the school run. The peace felt on the water was undeniable, and the fitness aspect alluring, so we persevered and got good enough to start trying new techniques. The added challenge of the shore breaks crashing made us learn pretty sharpish how to manage different conditions and encouraged us to try different SUP-related classes.

This is when we tried out doing yoga on the board, for example. It was hilarious, as most of us lost balance at some point, tumbling gracelessly into the drink, laughing as we pulled ourselves dripping back onto the board for more. You’d think it would be embarrassing, but as no one, except the goddess also known as the instructor, was spared from falling, it was just great fun.

The end result was that we had found an exercise that we loved that didn’t feel like exercise. Improved fitness levels sort of snuck up on us as shoulders, back, arms, and core were all being used for paddling and balance. It turns out it was both transformational and enjoyable…two words rarely used together! 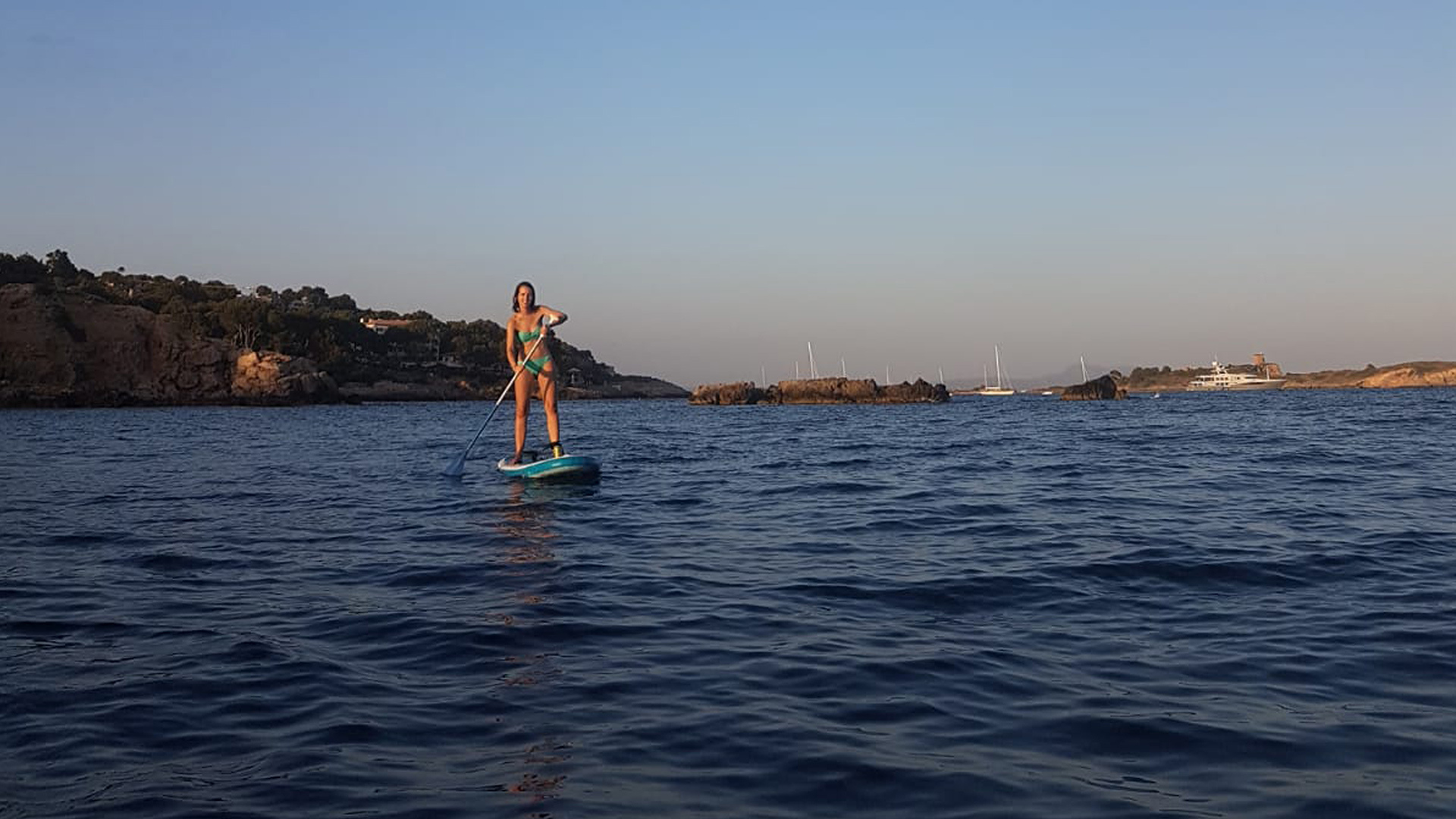 Where to Paddle Board on Mallorca #

Now that you’ve got the general idea, maybe you’re hopefully thinking it’s time to get out there and give it go yourself. Do it! There are so many amazing places on Mallorca only accessible from the sea and visiting them by paddle board is a unique and eco-friendly way to do it. Whether you want to explore coastal caves, check out hidden wonders, or enjoy a picnic in a private cove, Mallorca has loads of options.

For calm waters and a vast array of small beaches to drop onto, the Bay of Pollença is a must. Popular with tourists and the posh set, this area located in the northeast of the island is beautiful on land, but absolutely stunning when viewed from the water.

Santa Ponça, southwest of Palma, is another fantastic place to paddle board. About 1,5 kms off the coast lie the Islas Malgrats, two uninhabited islets that were declared a nature reserve in 2004 and a great place to view plenty of marine life and the dramatic rocky coast. Santa Ponça is also a good jumping off point for caves and coves, with many spectacular examples of both dotting the shores. Just south of Santa Ponça and Port Adriano is El Toro, a gem of a place with golden beaches galore and loads of coast to explore.

In the south, Cala d’Or is a paddle boarders paradise. Located on a series of small bays and inlets with sparkling clear water, it’s the ideal place to go on family outing.

Thumbs Up on Affordability #

If we haven’t sold you on SUP yet, then consider this: the price. Group lessons vary in price from €15-35 for an hour tutorial on the water, giving students the basics and including equipment rental. There are dozens of rental shops and water sport schools in most coastal villages and towns, so there will be little to no trouble finding one just right for you. Rentals alone run from €20-35 per person for a 3 to 4-hour rental period. Plenty of time to soak up the sun and take in the sights!

So get out there! Enjoy Mallorca from another point of view and get a bit of exercise in the deal. What more could you ask for?

Quality Time: What Can We Do With the Kids