Popular with British and even more so with German tourists for over forty years, Santa Ponça (or more commonly, Santa Ponsa) has been attracting visitors to the sunshine isle for almost as long as tourism has been in existence! Unlike many other resorts that have played a pivotal role in this industry, Santa Ponça has managed to avoid the high rise buildings, and instead reveals a background of villas and apartments, that tuck neatly into the mountainside, retaining some of its charm and beauty. The sandy cove stretches up to a bustling promenade of bars and restaurants, and during the summer months it really is a hive of activity. What is particularly nice about Santa Ponça is that over the years a brilliant expat community has developed, meaning that the resort maintains some of its liveliness during the winter, with several bars and restaurants trading all year round. 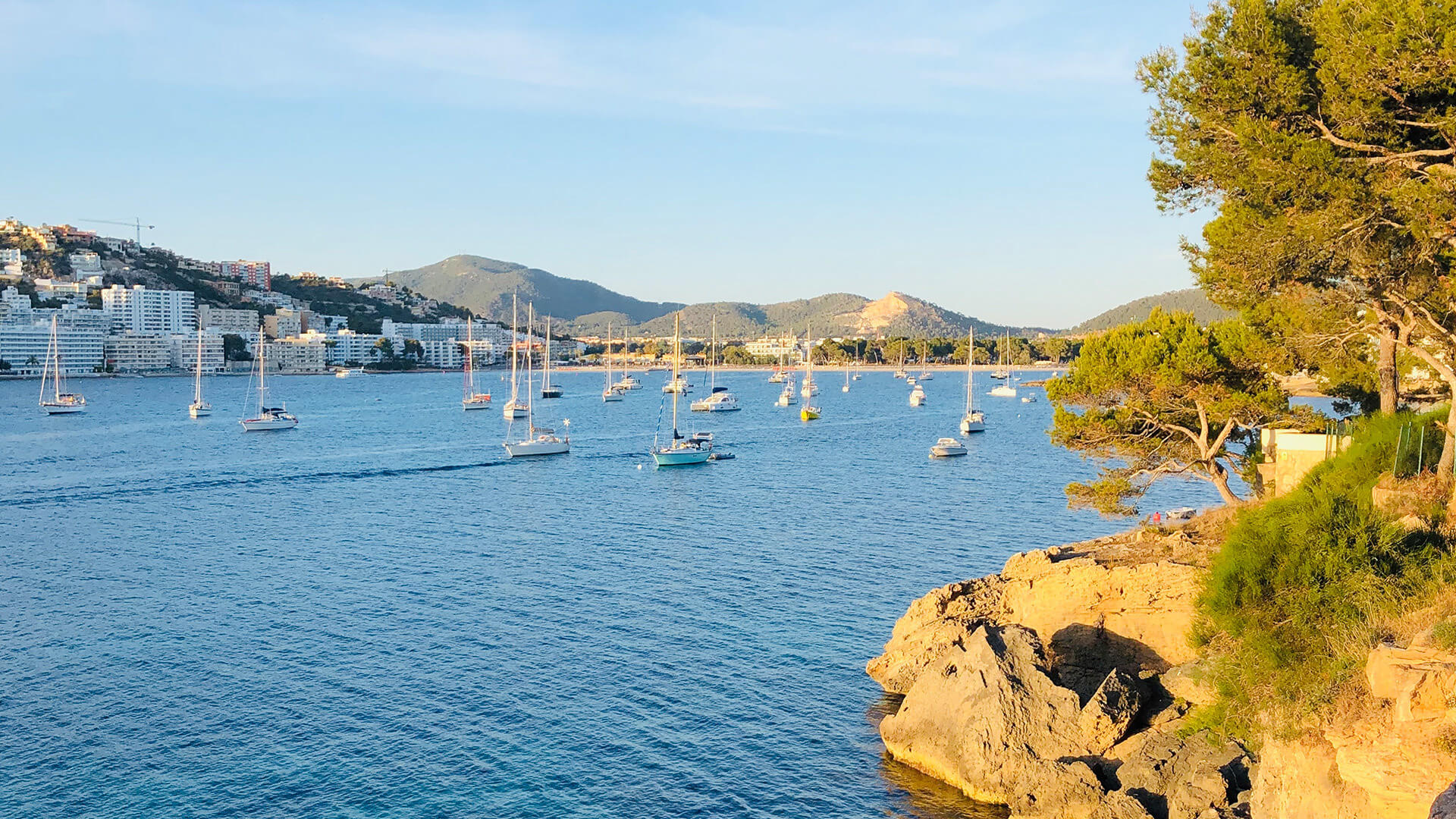 With a mere 25 minutes by car from the Palma's centre and the airport, you really get the best of both worlds, proximity to the city and the beach. There are several bus routes from both the airport and Palma’s intermodal station, and car hire is also nice and simple from Palma airport as is the direct journey on the motorway.

To many, Santa Ponça is merely a holiday hotspot, however it does hold a deep-rooted place in Mallorca’s history. With its name coming from that of the Roman Villa ‘Sancta Pontia’, it was here that Jaume I chose to begin his conquest of Mallorca in 1229. The bay of Sa Caleta, where he first landed, is now home to the Marina, but this historical landing site has been marked with a stone cross since 1929 – the Cruz del Descubrimiento.

For those interested in Mallorca's ancient past, the The Puig de sa Morisca Archaeological Park is an absolute must-see. The "puig" or hill was inhabited for a long time, the first known use of the site dating back to the late Bronze Age as a lookout for maritime traffic, followed by a Talayotic period when a tower was erected on the peak's summit, and the first settlers moved in around it. Given the hill's excellent strategic location and unhindered views it eventually came to play a central role in the creation of a kind of "early warning network" of the Talayotic sites in the area, allowing to control and protect the terrain against potential attackers.

In the 6th century b.c., the settlement became more important still by establishing trade relationships with the neighbouring island of Ebussus (Ibiza) as is reflected in archaeological finds of Phoenician and Punic origin. 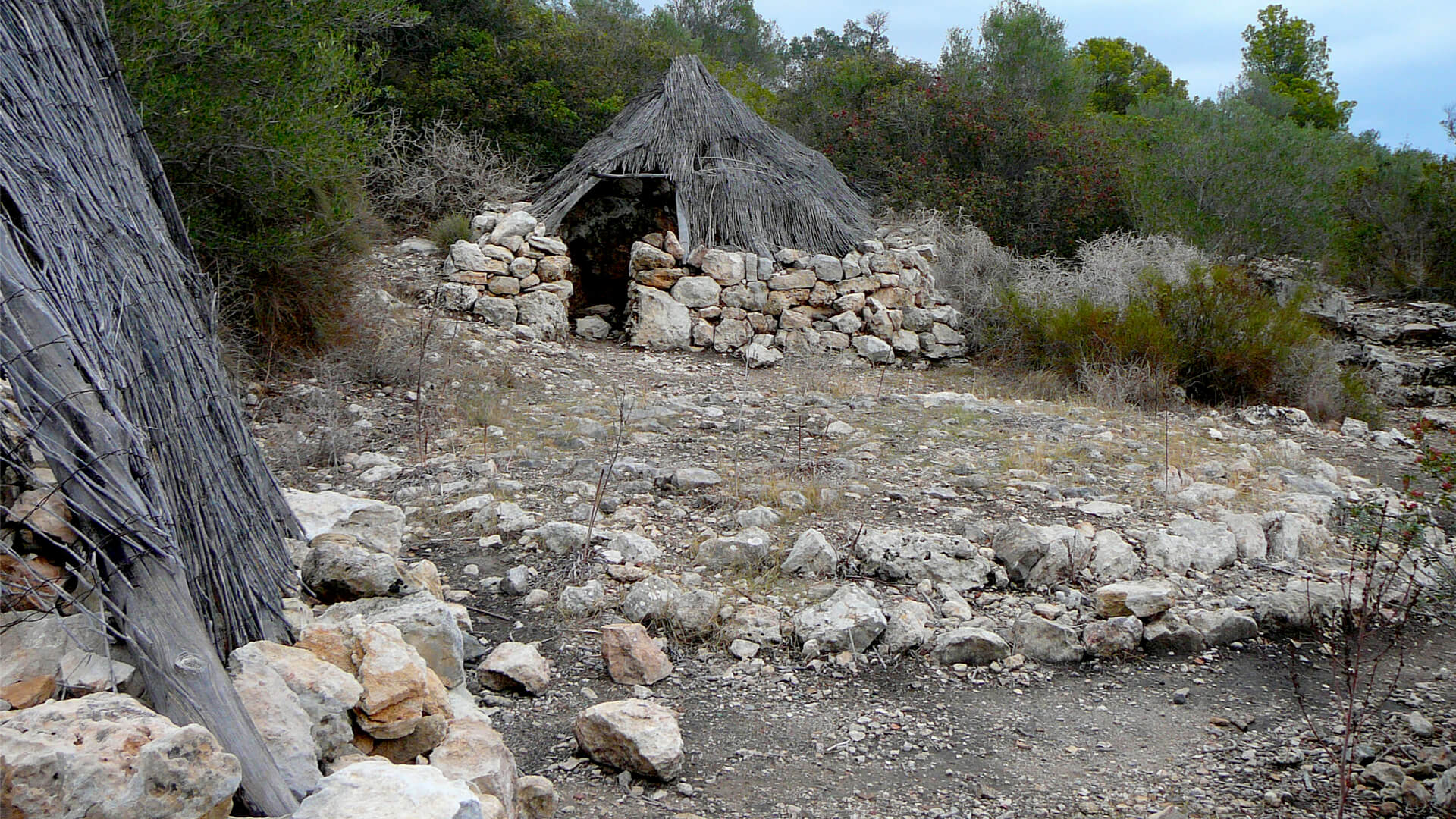 You are spoilt for choice with eateries here in Santa Ponça. In fact it’s hard to find somewhere that doesn’t offer tasty food at affordable prices. However, on personal recommendation, these are my two top choices!

La Solana
Serving up fabulous Mediteranean cuisine at affordable prices, La Solana virtually caters for everyone. The main menu is relatively small, but there are daily specials of freshly caught fish, or locally sourced meats- all of which sound tantalisingly tasty! The food is cooked fresh to order, and service with a smile is delivered by the wonderful Gino and his team. Vegetarian? Food intolerance? No problem- La Solana has you covered! I can guarantee you’ll be making more than one visit here during your stay, and for fans of tasty dishes- try the lasagne (it got a 10 from me)!
Address: Calle Huguet des Far 2, 07004Santa Ponça / +34 871 51 27 38

Restaurante Grill Manolo’s
Booking is essential at Manolo’s! For many years locals and tourists alike have frequented this restaurant for its wholesome and tasty Mallorquin and Spanish cuisine. Manolo is incredibly knowledgeable of all his dishes (in particular fish) and will guide you through the menu, as well as the specials (which change daily). Portions are a good size, leaving you comfortably full (but still with room for dessert!) and the prices are very affordable. From steak to grilled sea bass, paella to tapas- there really is a dish for everyone!
Address: Calle Ramon de Montcada 6, 07180Santa Ponça / +34 971 69 33 75

Every Saturday morning there is a small market between 09.00 and 14.00. If you have access to a car or fancy taking the bus, nearby Calvia holds a Mallorquin market every Monday and Andratx has its own market on a Wednesday too.

The star of the show in Santa Ponça is the 500 metres of pure white sand and turquoise waters, that have rightfully earned this beach ‘Blue Flag’ status. Sunbeds are available to hire throughout the summer months, and for those of you who tire of tanning under the sun’s rays, there is an assortment of watersports available on the beach. From paddleboarding to jet skis- everything is available from the beachfront.

Affordable Mallorca Tip: The beach is heaving during the peak season (June-August) so if you prefer a little more peace and quiet, join the locals at the nearby cove of Calo d’en Palliser, although smaller it’s just as beautiful and far less crowded!

The proximity to the Tramuntana also means that several hikes are accessible for avid walkers- all of varying degrees of difficulty. And Santa Ponça is a good starting point for cyclists, too. 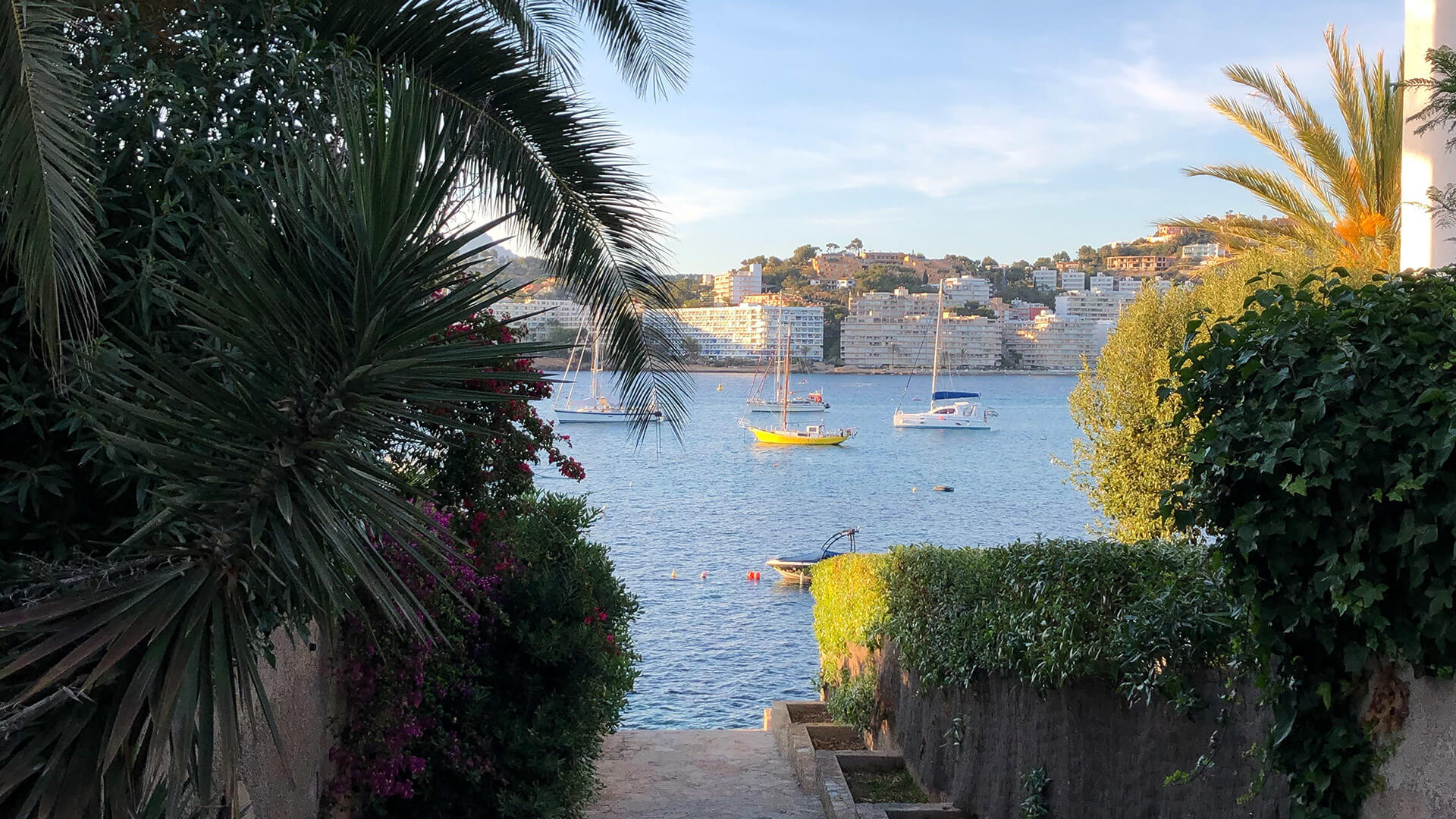 As with many towns on the island Santa Ponça celebrates its patron saint (King Jaume I) during the Festes del Rei en Jaume- around 60 events, including a battle re-enactment and medieval market form this week long celebration to commemorate King Jaume I’s landing on Mallorca.

Along with other towns and municipalities Santa Ponça also enjoys the San Joan fiesta; the ‘Nit de Foc’ sees music, dancing and bonfires adorn the beaches into the early hours of the morning!

One of the brilliant things about Santa Ponça is that it has property suitable for all budgets and needs! From holiday let, to family home- Santa Ponça is a great place to purchase your home. With prices starting at around 200,000€ (based on a 2-3 bedroomed property) and reaching sky high prices into the millions- it really does offer property for all. Rental figures are around 1,000- 1,500€ per month (based on a 2-3 bedroomed property) and many properties boast beach views or pools on site- holiday home or Spanish dream house heaven …

A contemporary seaside town, with a historical past- Santa Ponça may be a bit on the touristic side, but still has charm and beauty without compromising on any modern amenities. 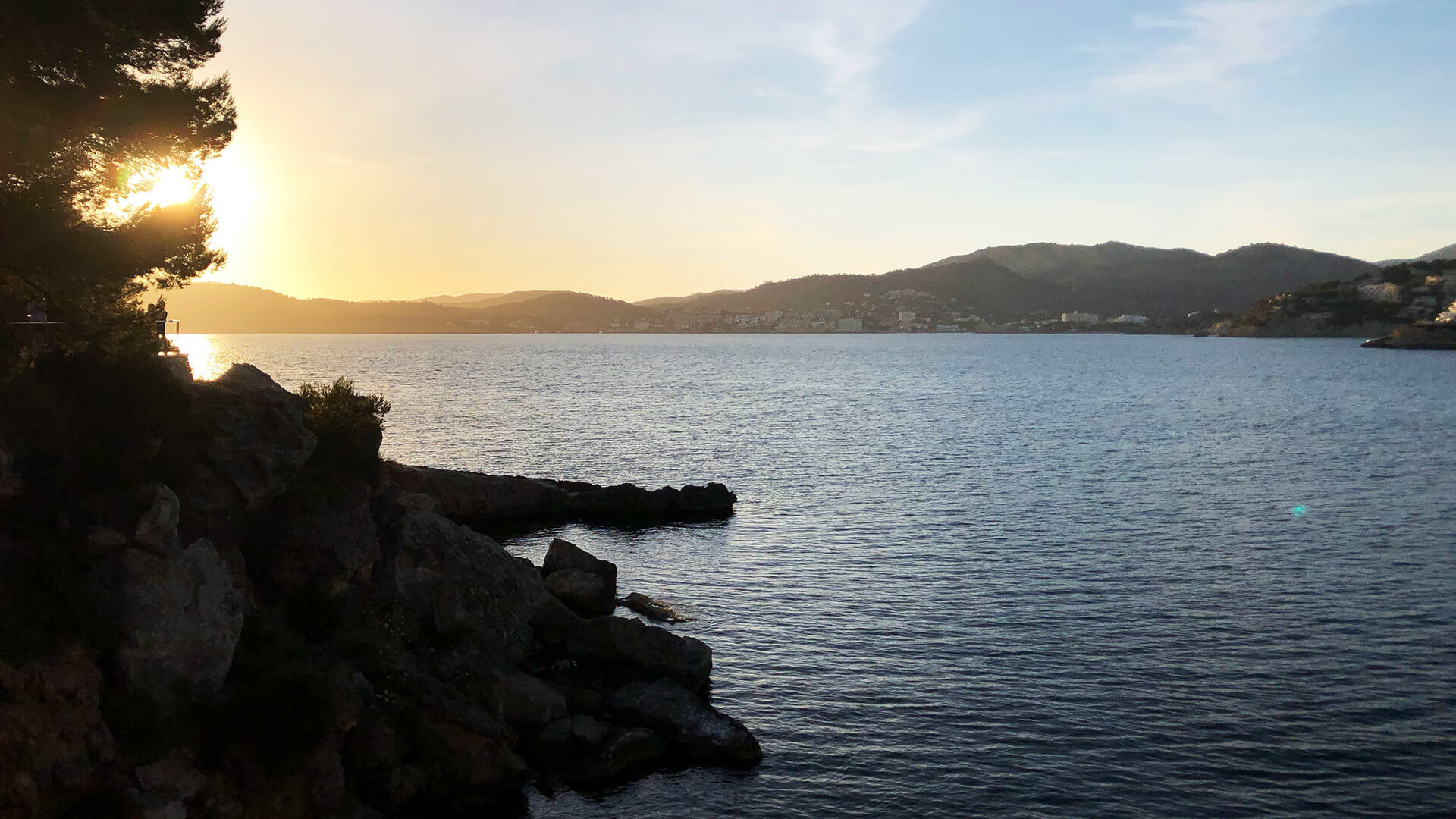