“We have to plant the tree. The carob tree.” – Nonie Darwish

Many of us haven’t heard or even thought about carob since sometime in the ‘90’s when it was being touted as a healthy alternative to chocolate but somehow didn’t quite catch on except for a certain type of health enthusiast and the odd ex-hippy. But with an abundant supply on Mallorca and some pretty serious health creds, it may be time to take a second look at these bizarre-looking little pods with a long and remarkably important history on the island. Join Affordable Mallorca as we go on a quest for carob! 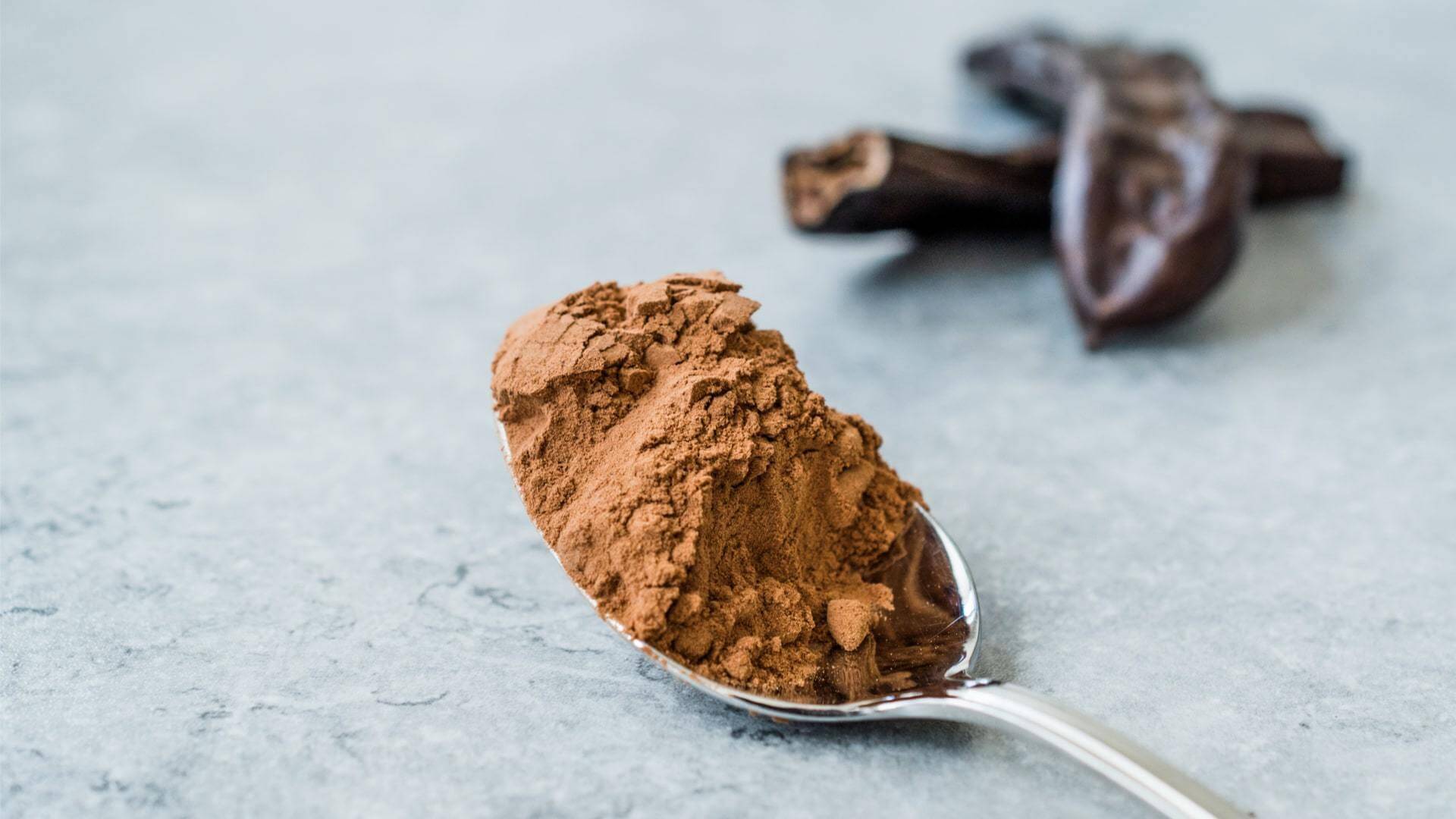 Carob comes from the Algarrobo, or Carob, tree (Ceratonia siliqua). They are endemic to the Mediterranean and the Middle East where they have been cultivated for more than four millennia. The Moors first started growing carob as a crop and when the Spanish took over, they brought the tree to Mexico and South America. The Brits even got in on the game and transported it to India, South Africa and Australia.

Carob is even referenced in the Bible. It is thought to be the "locusts" John the Baptist ate in his time in the wilderness. For that reason, the moniker "locust bean" came into common usage. In Spain, it's the shape of the fruit that gave them their name: algarroba is the Persian word for "donkey's jawbone".

Carob trees love dry climates, grow on land that isn’t much good for anything else and thrive where average rainfall sits at around 30 centimetres per year… so basically, they like Mallorca.

There is living proof that the trees have been around on the island for a long, long time: One particularly fine specimen – the "Algarrobo de Son Mora", on a private property in the Porreres municipality, is listed in the Balearic's catalogue of protected trees. It has two trunks, one of which measuring 3 and the other more than 4 metres in circumference, is 10 metres high and over 700 years old.

Although an Algarrobo that old and in such a good state is rare to find, in rural Mallorca there used to be no finca without at least one tree, planted close to the house for shade, and also for the simple fact that it supplied nourishing food, especially in times of need. During the Spanish Civil War, the pods served as a kind of survival ration, and the older people in the villages still remember that, as kids, they chewed on algarrobas as their favourite (if only) sweets.

Read on to find out more.

What Exactly is Carob? #

Technically, Carob beans are legumes. They grow from old stems on short flower stalks, are quite broad and leathery-looking and can be as long as 30 centimetres in length. The taste is less bitter than its arch-rival, chocolate, and the flavour is described as nutty or roasted. It is naturally sweet, so additional sugar is often not required when used in cooking.

Harvest season is in September and October, and you can often see farmers beating the beans off the trees with long sticks. It’s time consuming, backbreaking work which sadly pays very little, so more and more farmers have turned away from the trees and focused on more profitable endeavours, leaving trees rather neglected.

That being noted, there is a huge supply of carob on the island, just looking for someone to come up with a fantastic way to use it. 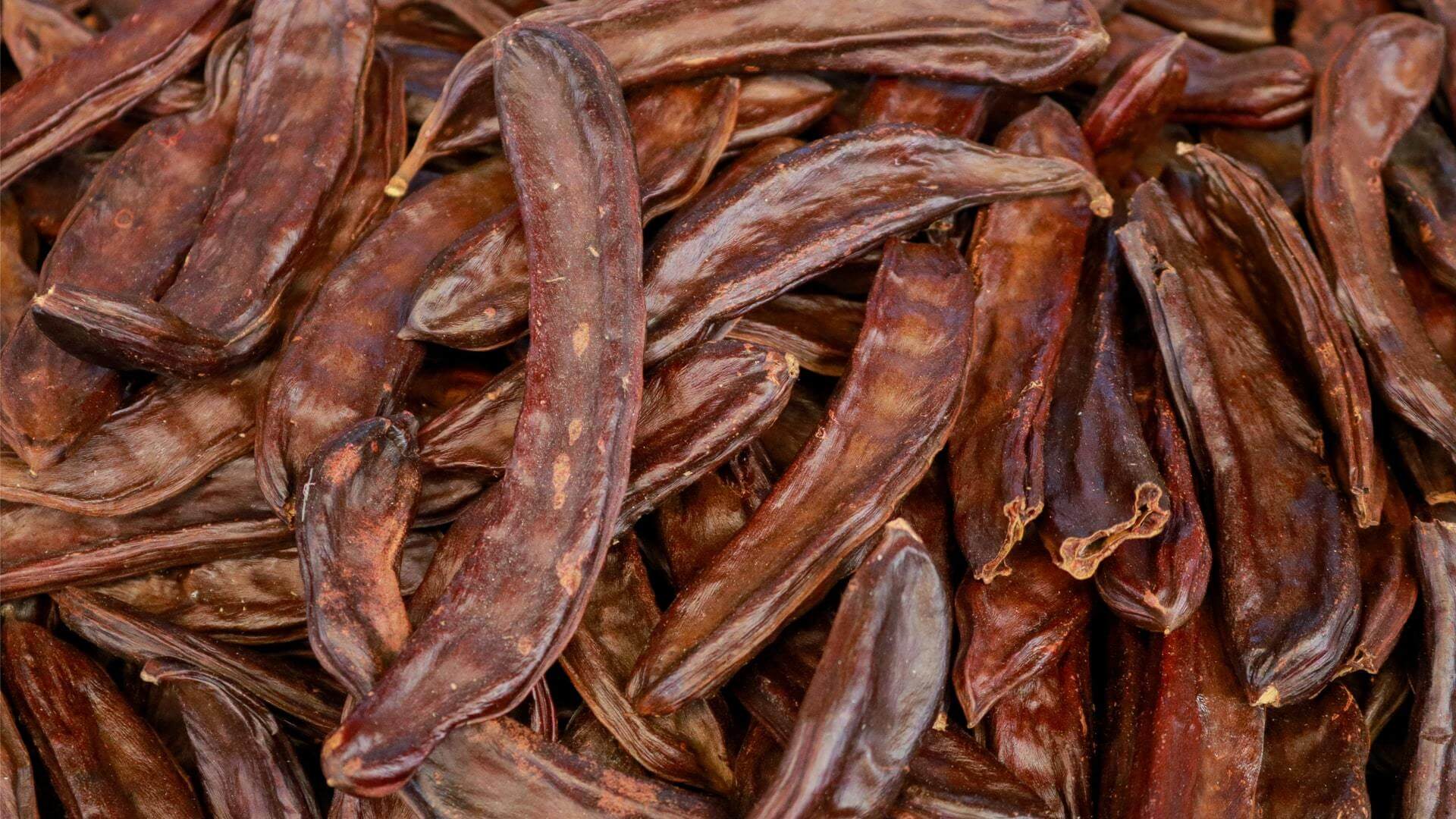 Once upon a time, carob seeds, which are uniformly the same weight and size, were used by goldsmiths to weigh precious metals and stones. This led to the word “carat” being added to our lexicon derived from Ceratonia, the genus name for the carob tree.

Traditionally, the Mallorcans used it to feed livestock. At the end of the 19th into the 20th centuries, we had a huge jump in the consumption of carob, mainly attributed to beasts of burden. The pods were exported to the mainland and abroad making them quite a good little money earner for local farmers. When the world became automated there was a gradual decline in demand, as draught animals no longer were used to the extent they had been up until roughly World War I.

So, farmers shifted the focus and found other uses for it. They found they were a tasty and nutritious snack and often kept a few in their pockets of them to munch on whilst working to give them a little boost in energy. This led to the idea of using it as a substitute for sweets, primarily chocolate because of its similarity in taste.

During the years of international isolation in Spain caused by the Spanish Civil War and lasting several decades, carob took on an importance in creating food items not readily available or easily imported, such as coffee. Additionally, it was used as a meal replacement during particularly lean times when food rations and shortages were commonplace.

Today Carob has pharmaceutical, cosmetic and industrial uses, and it once played a big role in plastics production, but mostly, it has been used as a substitute for chocolate.

What are the Health Benefits? #

Loaded with several minerals, vitamin A and many B vitamins, the carob pod is quite good for you. It also has one-third the calories of chocolate, is practically fat-free, is high in fibre in the form of pectin, and has no oxalic acid, which is an inhibitor to absorbing calcium in the body. It is hypoallergenic, and is rich in both protein and sucrose, which gives it its natural sweetness. It also has no caffeine, so it’s ideal for those with high blood pressure. It is also vegan and gluten-free. 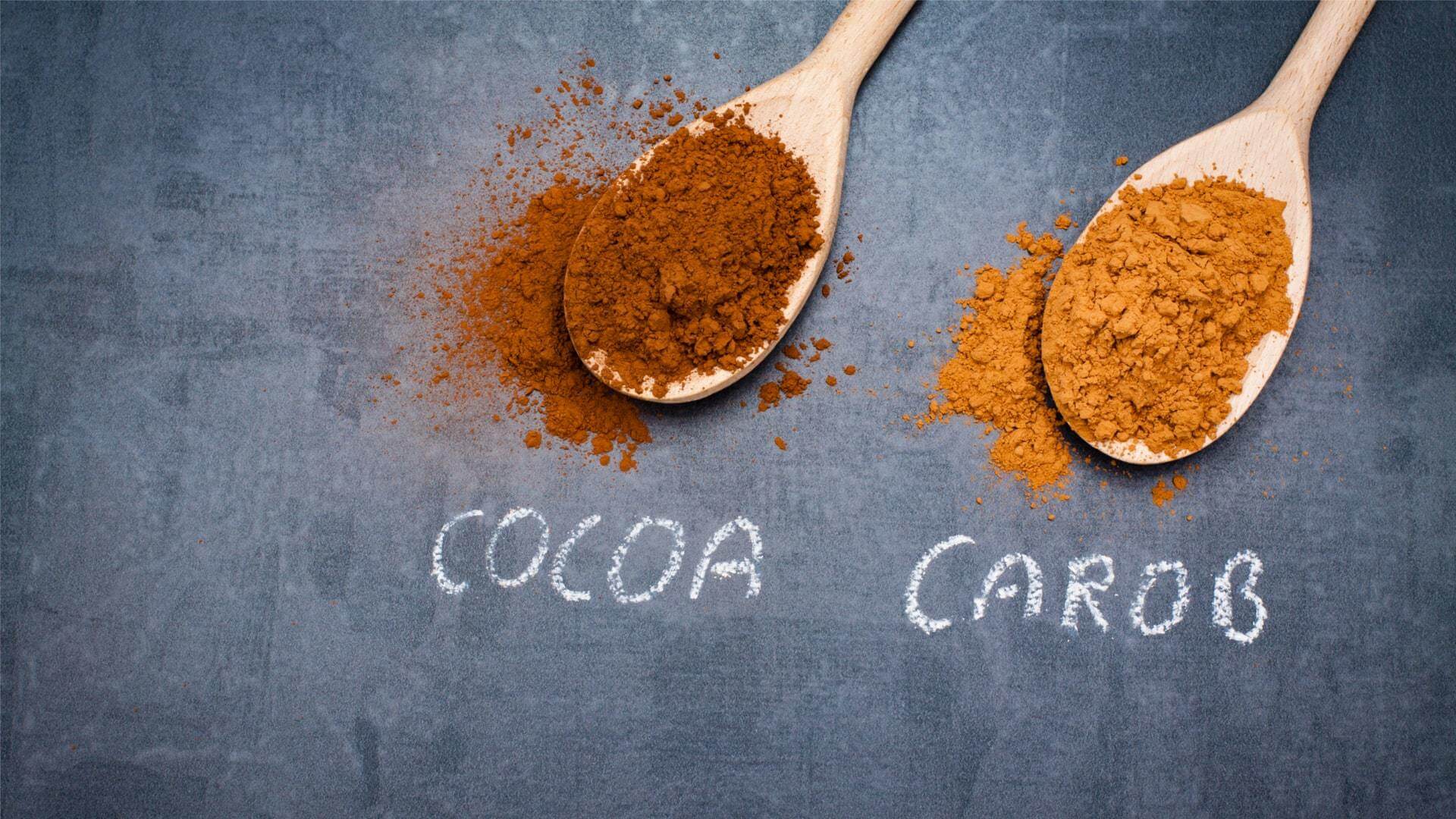 Processing raw carob is a simple ordeal. Pick and wash the pods and steam or boil them in just enough water to cover them. Cooking makes the pods softer and easier to split open. Remove the seeds and chop the pods into small pieces. Either air dry them or put them in a dehydrating machine, but either way, make sure they are very dry. The final step is to put the pieces into a blender and grind them into a powder which can be used for many delicious treats.

You can replace cocoa with carob in recipes, simply using the same amount; or use it as an added touch of sweetness. Sprinkle it on yogurt or ice cream. Add it into bread dough or cookie batter. Make hot carob rather than hot chocolate.

Why not take a stab at making your own bars or pastries. We love them in our house and feel good about the kids having them as snacks rather than store-bought nibbles. Two of our favourites are:

Add all ingredients together in a food processor and give it a taste to your liking by adding a bit more carob or vanilla. You want the consistency to be pourable but not watery. If its watery, add another tbsp of flour.

Pour onto a baking sheet, into chocolate moulds, or into cupcake liners and let harden. If your home is too warm, place them in the fridge to cool. When they’ve set, you can eat! Store in a sealed container in the fridge for up to two weeks or freeze them for up to a month. Preheat oven to 175°C for a metal pan or 160°C for a glass one. Grease a 20x20 cm (or 8x8”) brownie pan. Combine butter, sugar, eggs and vanilla until fluffy, then add dry ingredients and stir. Bake 25-30 minutes and cool for at least 15 minutes before cutting. 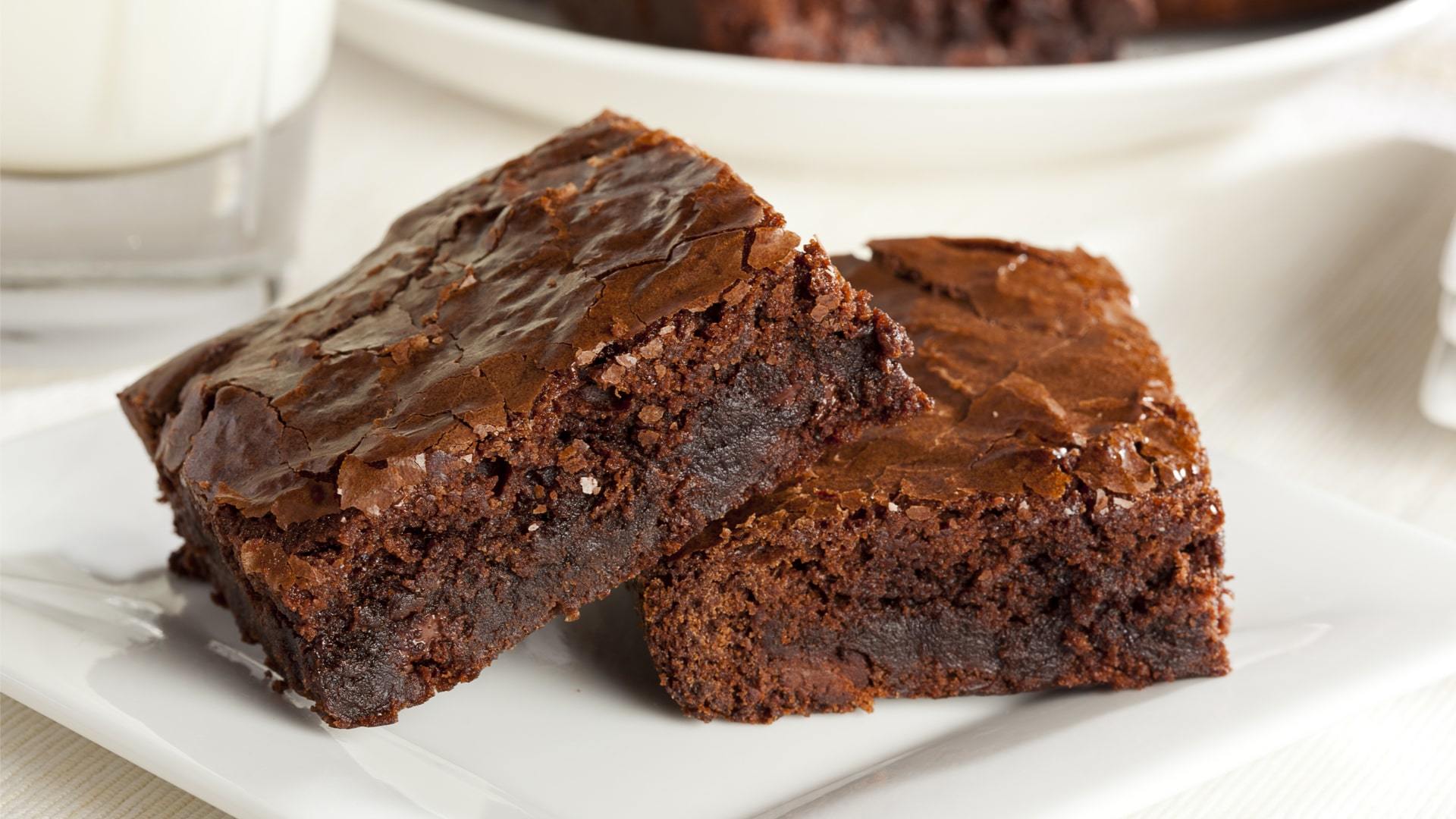 Here is our final recipe from Chef Yochanan Lambiase

Pour the mixture into a bowl and chill in the refrigerator for 30 minutes.

Step 3: Garnish. Suggestion of garnish with bits of orange from Sóller.

Chocolate contains substances that are toxic to dogs. Methylxanthines, specifically caffeine and theobromine, affect dogs because they are far more sensitive than people. Different types of chocolate contain varying amounts of methylxanthines. The darker and more bitter, the greater the danger. So pick up Mallorcan Carob to keep you and your dog healthy!