Within the past 50 years, Sant Antoni, which used to be met with total indifference, has evolved into a mass phenomenon. – Bernat Servera, veteran organizer and participant of the Manacor festivities in an interview with Ara Balears

In 2021, due to COVID restrictions, we will not be celebrating in our usual raucous manner with loud music, processions of fire breathing dragons, the blessings of animals and more. We have included a few photos and videos from last year's San Sebastià Concert. He is the Patron Saint of Palma and thought to have brought an end to the plague in 1524. We look forward to next year and the end of our current "plague."

This Time of Year #

Like many countries that have at some time in their history been under Roman Catholic influence, Mallorca knows the "crazy days" of Carnival. This time of merrymaking and masquerading that ends in a period of fasting and praying for Lent, a tradition based on Jesus' 40-days' fast in the wilderness.

It is as if people were using this time of the year as a last chance to get the most out of life and enjoy it to the full before the big shut-down on Ash Wednesday. Processions, music, dancing and fancy dress, but also political satire and the (symbolic) taking-over of power from worldly governments by demons, fools, jesters or clowns are all part of the game. 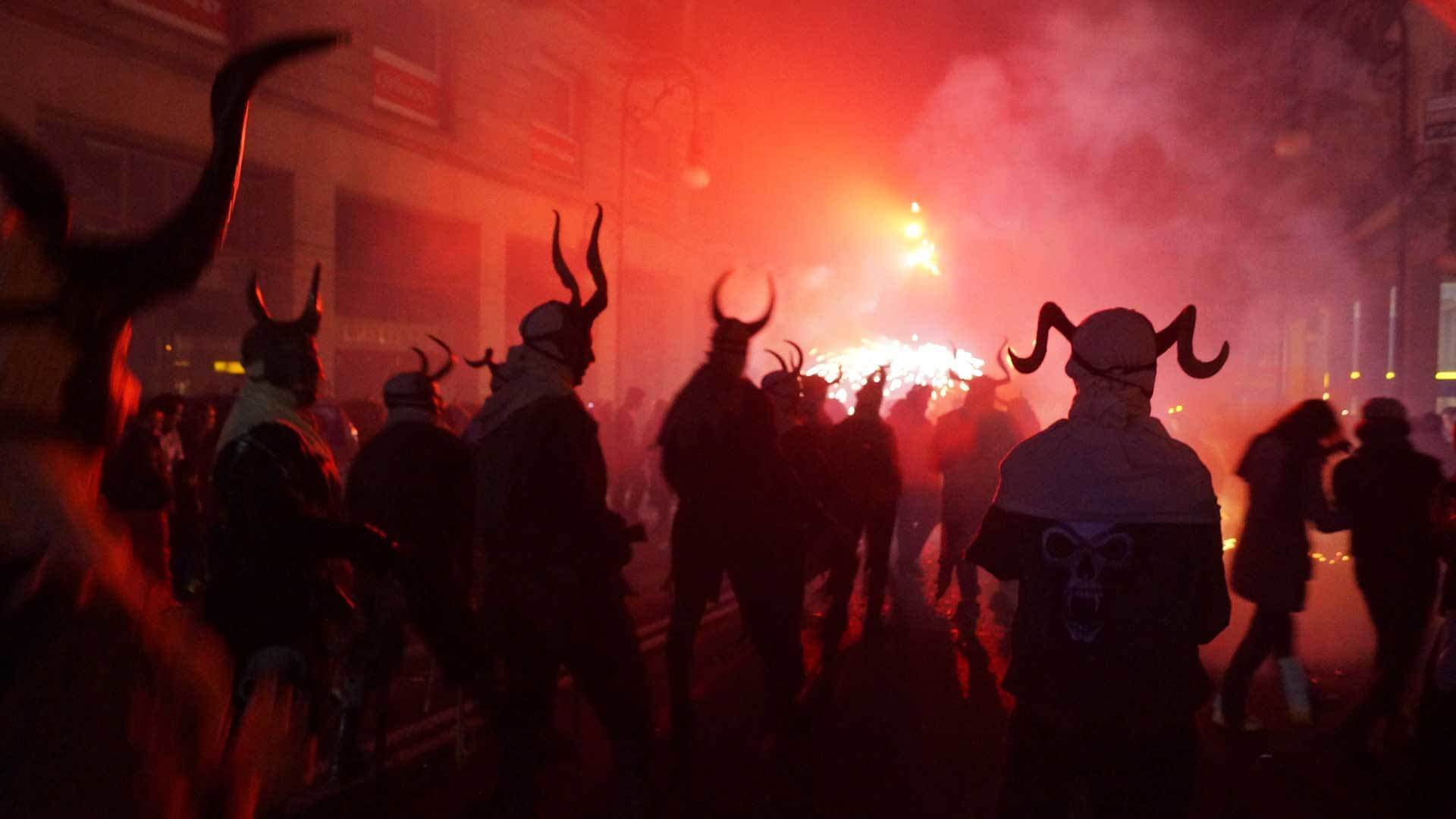 Mallorcans are known for their love of festivals and, under normal circumstances, they don't let any such occasion pass without making the most of it. No wonder that, after the suppression of all local and regional traditions during Franco times, the old Catalan festivals saw an unparalleled revival. There was one celebration that seemed to have special allure for the locals: Sant Antoni.

After the dictator died in 1975, villages - especially in the east of the island - got into a kind of competition about who could organize the most original, most spectacular or wildest event to celebrate the Saint, which explains why during the months of January and February there are so many different festes in the rural regions of this island.

In Muro, whole herds of sheep are driven through the streets of the village to receive their blessings, and even in times with less and less farmers owning animals, these blessings are well attended. People just bring their cats and dogs instead.

In Manacor, there is a ceremony called goigs, where in church, after mass, more than a thousand believers stand on the benches singing and swaying in an eight-minute chant of almost ecstatic proportions. And for one day, three devils take over the mayor's office and become rulers of the town hall.

In Pollença, the trunk of a tall pine tree smeared with soap is set up in town, and young people try to climb it.

In Artà, the dimoni take over the village for a day.

In Sa Pobla, young people dressed up in fancy costumes with giant heads, the caparrots, dance through the streets. Even Groucho Marx is part of the gang.

And in Algaida, they celebrate another saint altogether, Sant Honorat d'Arles, and male dancers dressed up at women, the so-called cossiers, perform in a special show in his honour.

Palma couldn't very well stand back behind these spectacular and colourful festivities and decided to step up celebrations of its patron saint San Sebastià with fireworks and what is probably the biggest correfoc on the island. San Sebastià Day is 20 January. Normally celebrated with a fire breathing dragon symbolizing the end of the plague in 1524.

Click here to watch and listen to the music

Breaking free of rules and getting out of the tedium of everyday life seems to be the one common denominator behind Mallorca's winter festivals. To be crazy, to do the normally forbidden, to forget about morals … and, sometimes, to cause mayhem – what would be punishable acts on a normal day is permissible during Sant Antoni (within limits, of course). The laws of political (and sexual) correctness seem to loosen their grip for this once.

So, spectators, be warned: it can get a bit rough at times, and sensitive souls might better stay home in the safety of their own four walls. Take a look at the video below of an impromptu local gathering from last year.

The yearly carnival street parades, locally called the ruas, have paled somewhat in the face of the more spectacular, wilder Sant Antoní and San Sebastià celebrations. And the big carnival balls that used to be all the hype in the 1920s are an almost forgotten thing of the past. But you never know: we've seen quite a few revivals on this island and there is no tradition that couldn't be re-sparked. Have fun dancing with the devils!

Raucous Night of Merrymaking with fire-breathing dragon and dancing devils

2020 was a rough year. We had a massive celebration before COVID struck the island in mid February. A year on, we have a prolonged period of restrictions due to the high infection rates and travel restrictions. While we can't enjoy Carnival in our normal ways, we can remember our Saints (and our Sinners). We can remember the good times and look forward to more of them when we all get through this very rough period. The good times will roll again...until then, please stay safe and wear a mask.