While we didn't have Carnival this year, we have hopes of returning to our more normal celebrations in 2022. Until then, Romi's recount of 2020 is worth watching. We need to remember the good times so that we can repeat them when COVID is more controlled.

What is Corre foc? #

A Corre foc – sometimes also spelt in one word as correfoc, the "Fire Run" - is certainly one of the most impressive fiestas to witness on this island. Wild fire devils and demons chase through the streets – nowadays often on inline skaters – frightening onlookers with firecrackers, showers of sparks and Bengal lights.

When Sant Antoni or Sant Joan (or whatever saint is used as an excuse for the fun) steps forward to drive them back to hell with the raised cross, they rage all the wilder. Although the origins of the ceremony seem to go back to pre-Christian times and reach all the way back to Mallorca's era of Bronze age shepherds' culture, the first Corre foc on the island wasn't held before 1993 when locals discovered the old Catalan tradition of fire runs for themselves and made it their own.

As wild as the fire runs might seem, the safety of everybody is foremost on people's minds. Up until 2011, everybody could join a group of demons or colla, but then the EU stepped in. Threatening to shut the fire runs down altogether or at least fence them in, they imposed a strict set of rules with a view to guarantee safety. Every dimoni must now carry an ID card to prove he or she has participated in a workshop and passed a test on the safe use of pyrotechnics. 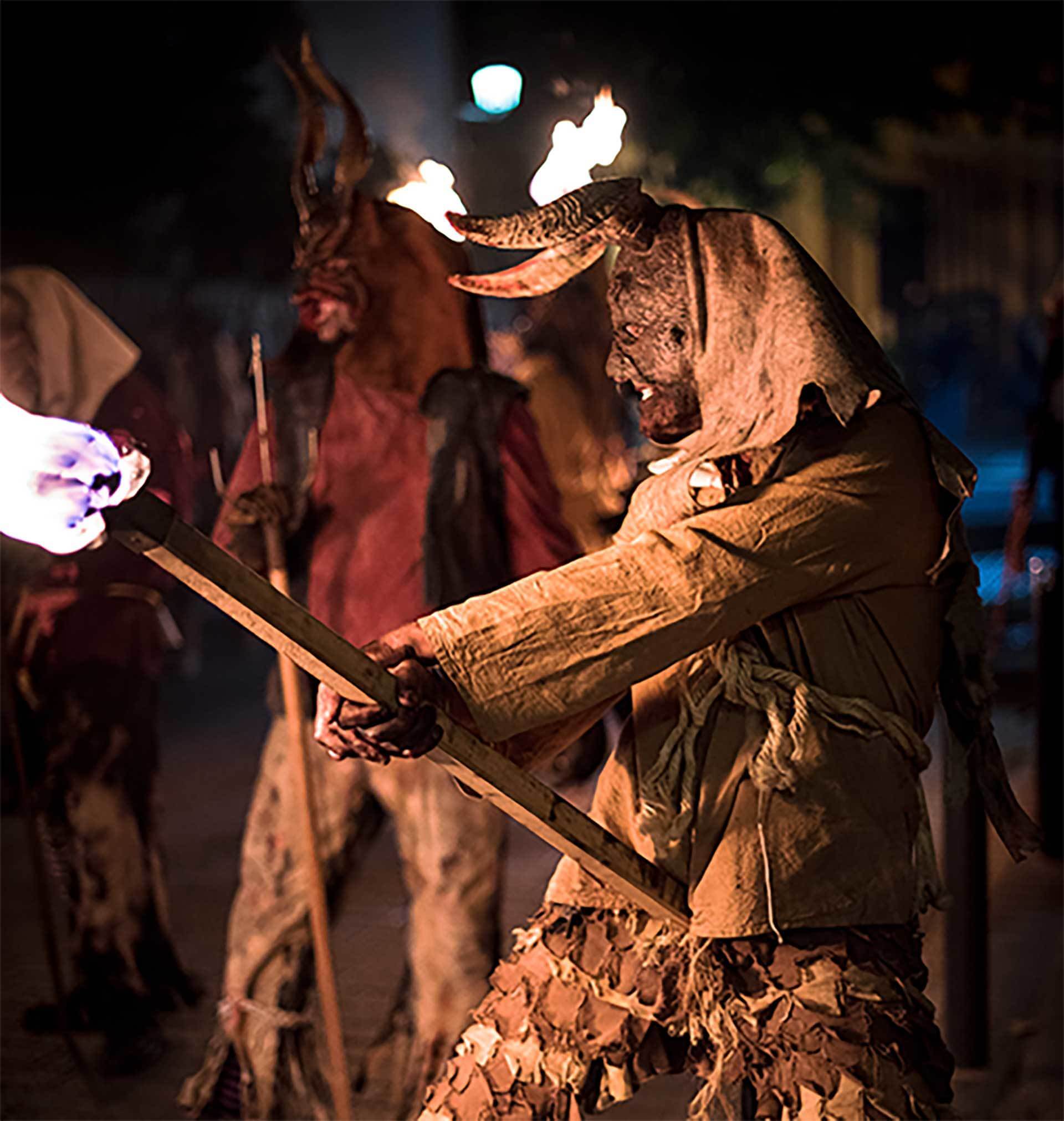 Romy at the Night of Fire #

Fire! The night of fire burns! Boom! Fireworks scream and flash! Drummers loudly beat their drums. Drumming that incites you, inspires and even invites you, because in many Mallorcan villages and towns you have permission to dance with the devil for one night.

Approaching the ‘CorreFoc’ (Fire Run) fiesta for the first time, through the throngs of people weaving in and out of old cobbled streets, you may well be forgiven for thinking you’d stumbled upon a Satan worshipping festival, but this celebration reaches far deeper and is steeped in tradition. According to historians, it dates back to pre-Christian times into the millennia-old peasants' and shepherds' culture of the island.

In Port Andratx, a sense of high expectation fills the air on the Night of the Devils. An intensity everyone can feel, because we’re all waiting for the same thing. I find my vantage point upon a stone wall and start to notice hundreds of people milling about. The elderly cradling each other and their walking canes, young children fearfully holding onto their mother’s skirts. Hordes of families and friends are present as well as resident ‘Glamour Pusses’.

Shoulder to shoulder they stand together, yet, in stark contrast to one demographic that never misses the event, the ‘Renegade Youth’. These little urbanite ninjas come prepared, adhering to the proper dress code. Riot Attire: Gloves, trainers, trousers, hooded jersey, a bandana or cloth covering their nose and mouth, revealing only their ready eyes.

There’s a smell of acrid smoke coming from down below, where drums accompany a procession as of ancient times. Behold, fire dancers dressed in tied black robes, twirling instruments of fire parading down the public street. I turn to look up the stone slope, where a lifetime of innocent souls once trod in ascent towards an illuminated church, against the light of which, they stood. Dark and strange silhouettes in the distance, flaming torches reflecting on their heads with curled horns.

Suddenly, the drummers stop…only to begin again with extra fervour. Our hosts have arrived! Down the slope the darkened figures arrogantly stride, mad and dangerous inside a column of flames. Full of swagger and drink, spitting fire as if in spite, laughing hard, hollering out loud! They wear sack cloth, rope and leather in black, brown and red with clanging goat bells hanging from the front of their trousers.

I become more entranced the closer the Devil gets! My growing desire is to see how their horrific features of twisted angles to high foreheads, cheeks and jowls can capture nightmares!

Then, just as one ‘Dimoni’, or ‘Demon’, passes me by, I catch his human eye behind the mask. The moment chills and thrills my soul. What’s real in this fantasy? 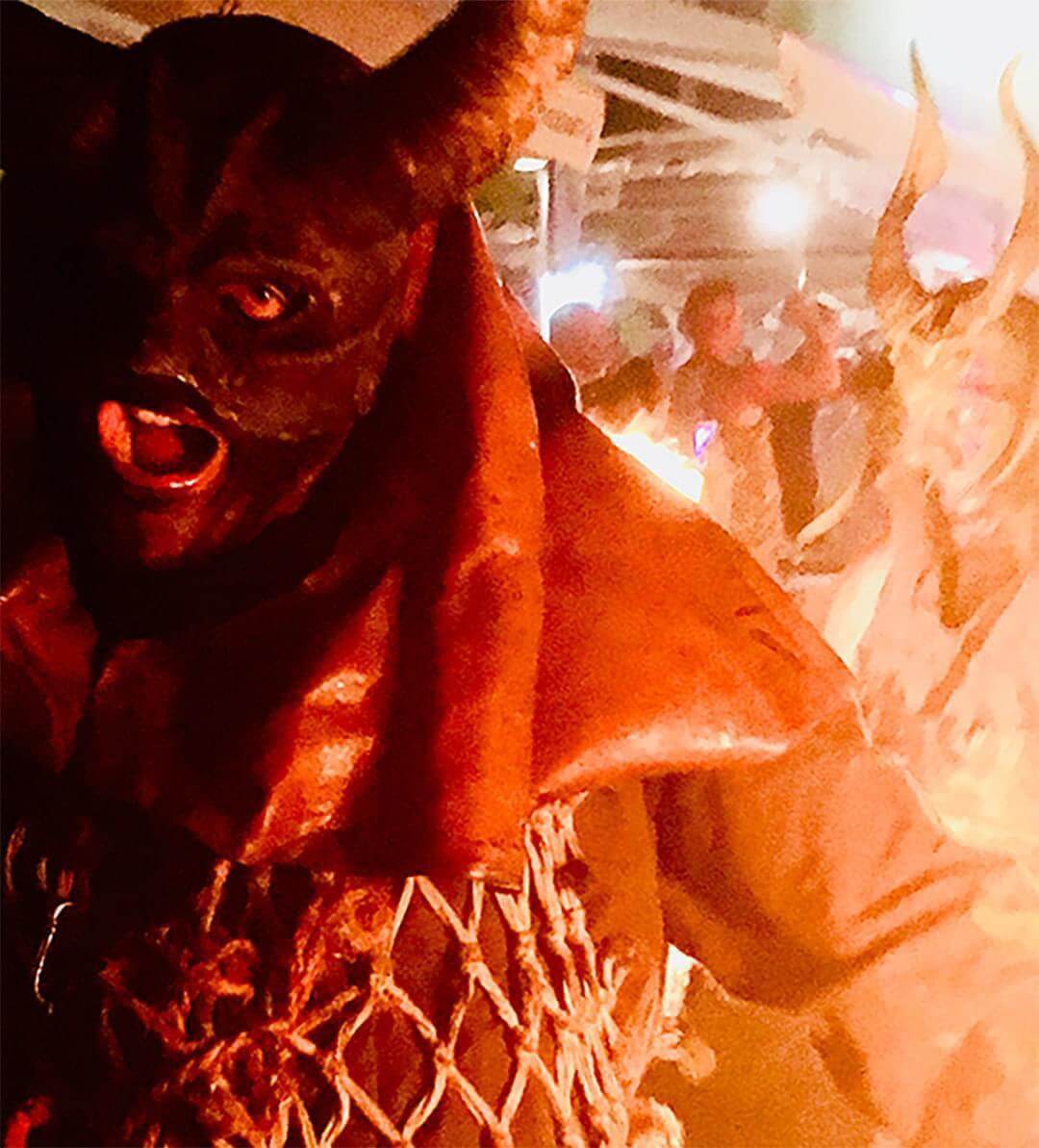 Dimonis lurch forward to tease and taunt the unsure crowd into stepping back, their fear parting them like the red sea. This scary spectacle is not for the fainthearted. It’s designed to really frighten you. By comparison, Halloween is nothing but child’s play.

Hypnotic drumming has long since gathered the masses into a circle, to share the vibe of being ‘one tribe’. Now, our demons and participants forge into the central point and run about wildly, breathing out flames, firing rockets from pitchforks that scream like Banshees. It’s clear why ‘Renegades’ dress as they do. They may like to play with fire, but they don’t want to get burnt. This is the ‘Fiesta de CorreFoc’. For underneath a canopy of white sparks held from a tall, spinning, screeching wheel, is the Devil himself, with his minions and welcome newcomers alike, all jumping for joy and forming a reel of dancing shadows. A coiled serpent is rolled out spewing fire and, finally, at its frenzied climax a curtain of light pours down on them like a waterfall of white fire in Hell.

At last, the drumming stops. The Dimonis disappear back into the smoky night, leaving only silence and disarray. Crowds begin to disperse knowing that tomorrow, daily life will return to normal.

That is.., until next year. 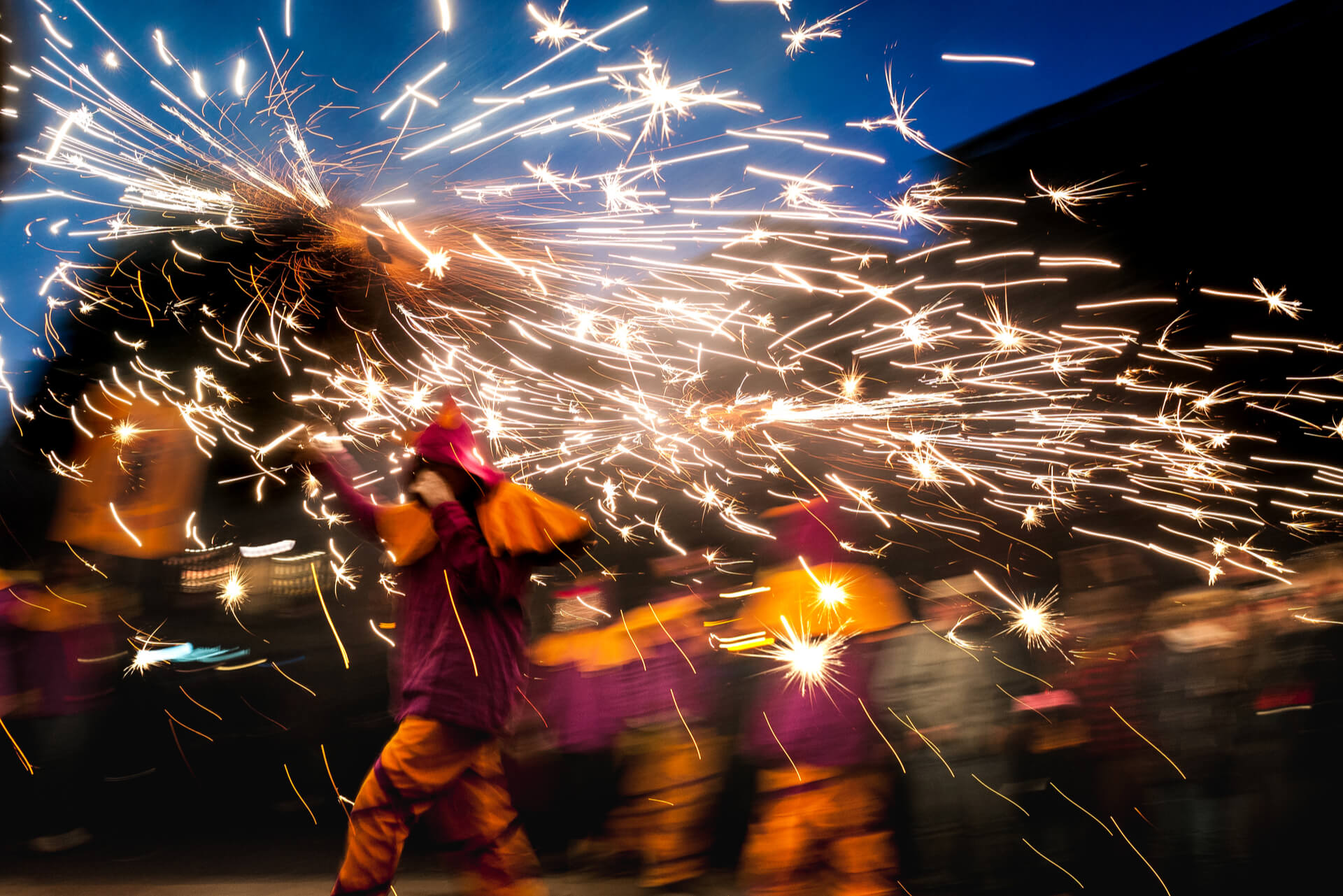 A Few Bits of Information #

The Corre Foc Festival in Andratx is organised by Colla Dragomonis Andratxwith the support of the Ayuntamiento de Andratx.

Within various areas of Mallorca, CorreFoc Festivals occur at different occasions at times of year, e.g. on the eve of Sant Antoni (January 16th), patron saint of animals, or in Palma in honor of the patron saint of the city, San Sebastian (January 20th), or on Sant Joan (June 23rd).

Affordable Mallorca Tips: Corre focs are no gentle affairs, and sometimes there can be quite a bit of mayhem. We do not advise to bring small children. Ad please, by all means, leave your dog at home! To be on the safe side, wear clothes you don't mind getting a few burn holes, and choose natural fabrics like cotton that don't catch fire as easily as synthetic materials. If you have sensitive ears, don’t forget to bring earplugs.

Dance with the Devils 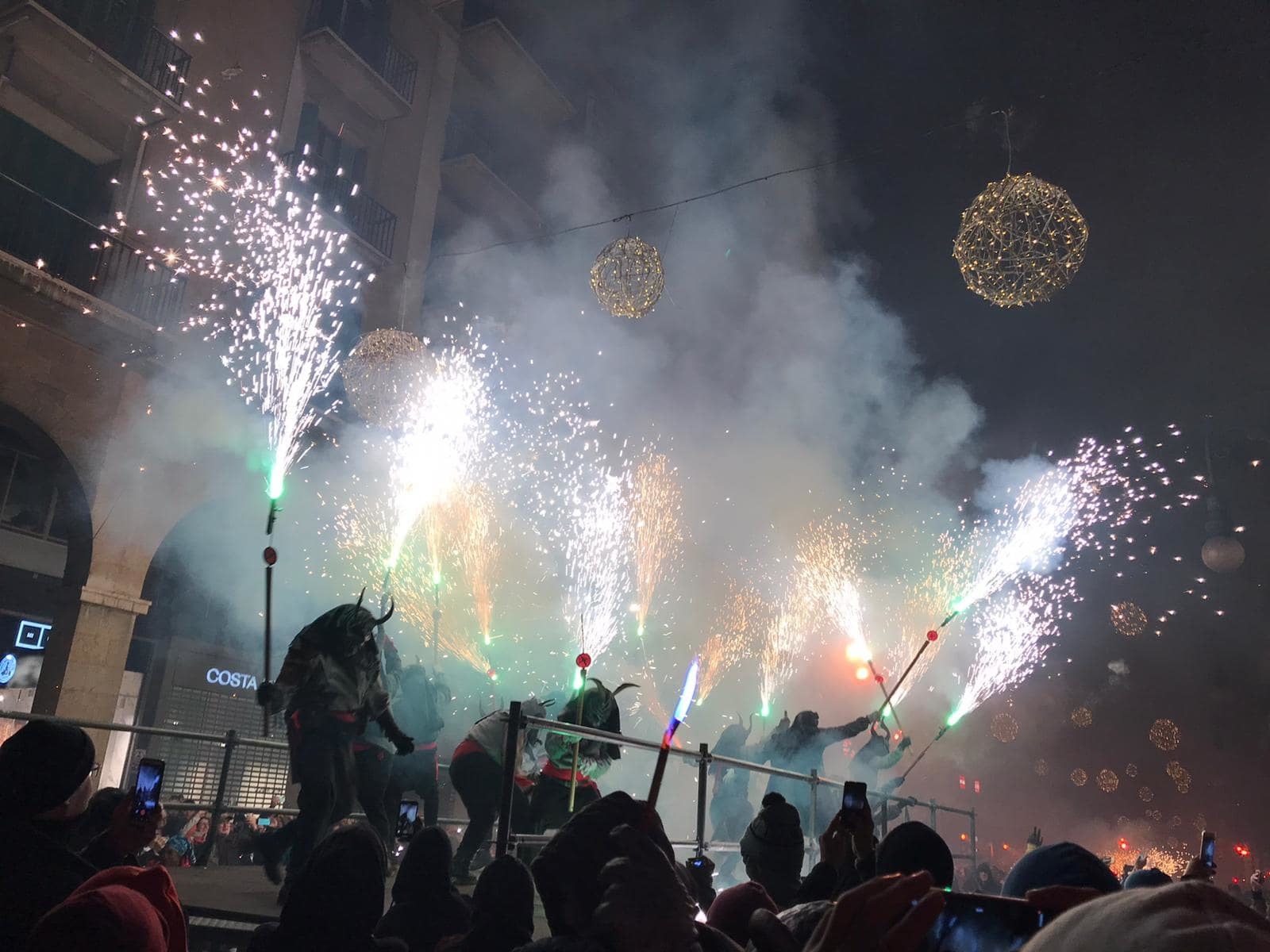 Correfoc- Dancing with the Devils in Palma

Feel like you are there, dancing with the devils

Another Fiesta You Shouldn't Miss #

In addition to the numerous activities offered throughout the entire season, those lucky enough to find themselves in Port Andratx during mid-July will soon be immersed in what is arguably the Port's most festive month for Las Fiestas de la Virgen del Carmen, the Patron Saint of the Sea. These traditional fiestas have withstood the test of time and are held every year around the same date, taking place on and around the 16th of July, with much of the Port taking part in this revered celebration.

Loud Night of Partying for All Ages 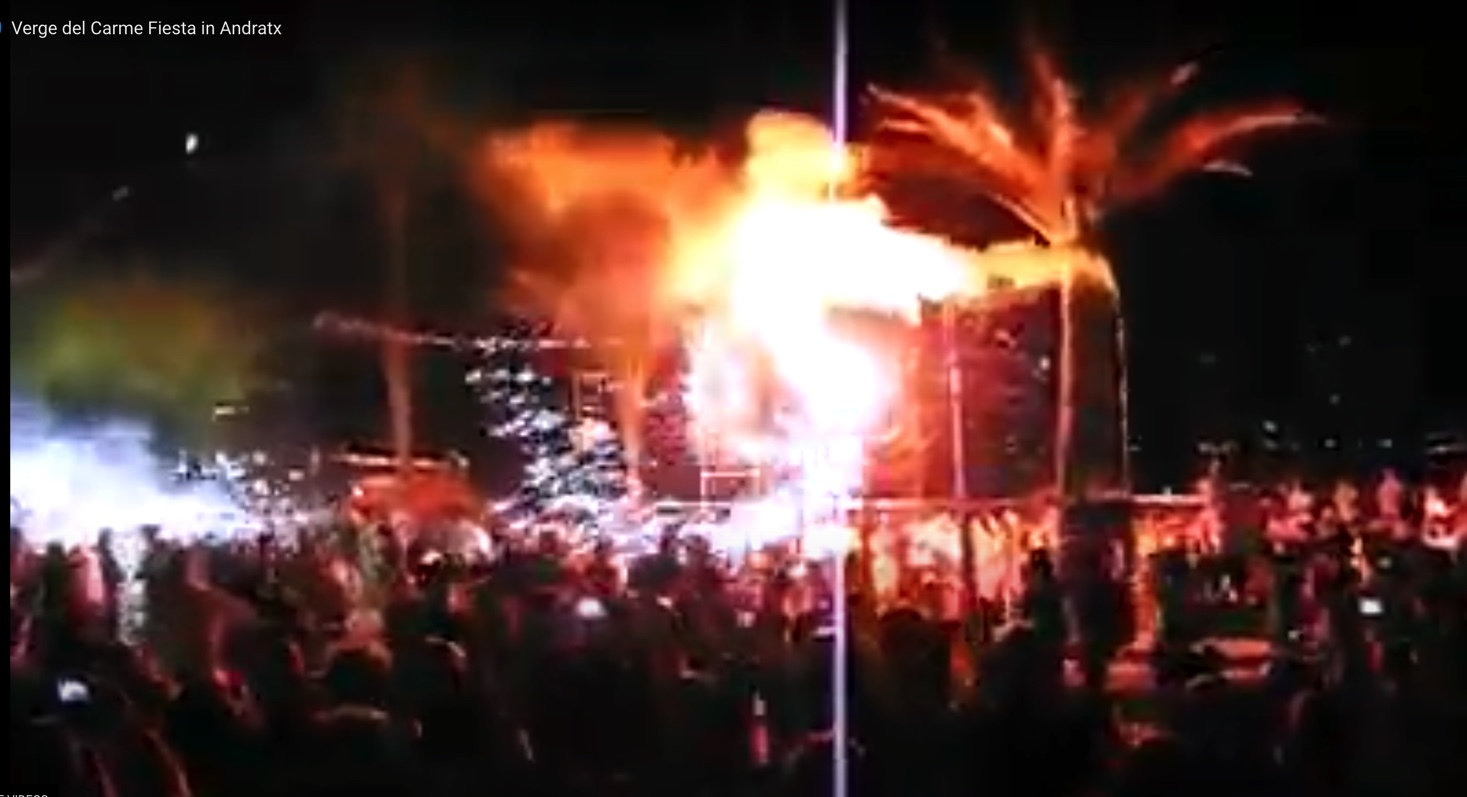