“Champions believe in themselves, even when no one else does.” – Jorge Lorenzo

He ranks sixth on the all-time MotoGP wins list. He was the first Spaniard to win multiple premier class titles, has won 3 MotoGP World Championships, is a two time 250CC champion and has a stunning 68 career wins. He is also a son of Mallorca…he is Jorge Lorenzo Guerrero. 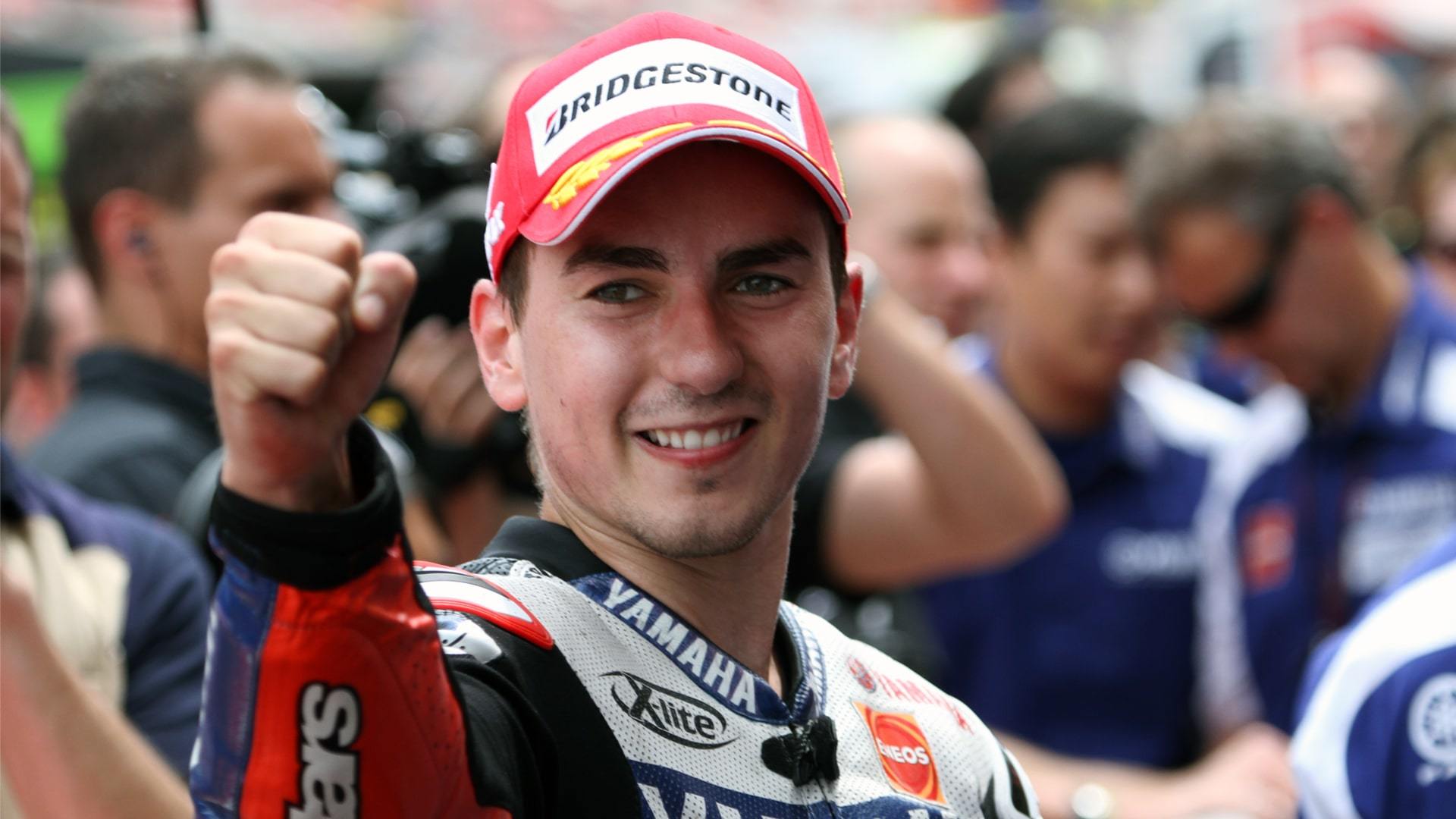 Born in Palma on 4th May 1987, #99 grew up in a solidly middle-class family as the only son of Maria Guerrero and Jose Manuel Lorenzo.

His interest in motocross started at a very early age. He was three years old when he first sat on a motorbike, hand-built by his father, and that was it for the young Jorge. His father saw the spark in him and began entering him in Mini-Motocross races and by the age of eight, he was winning competitions despite the other racers being older than he.

By 1997, at the age of ten, he started competing nationally and he raced his first Spanish Grand Prix five years later. Whilst still in his teens, he won two back-to-back 250cc world titles in 2006 and 2007 and became the most celebrated and successful motorcycle rider in his class in Spain. 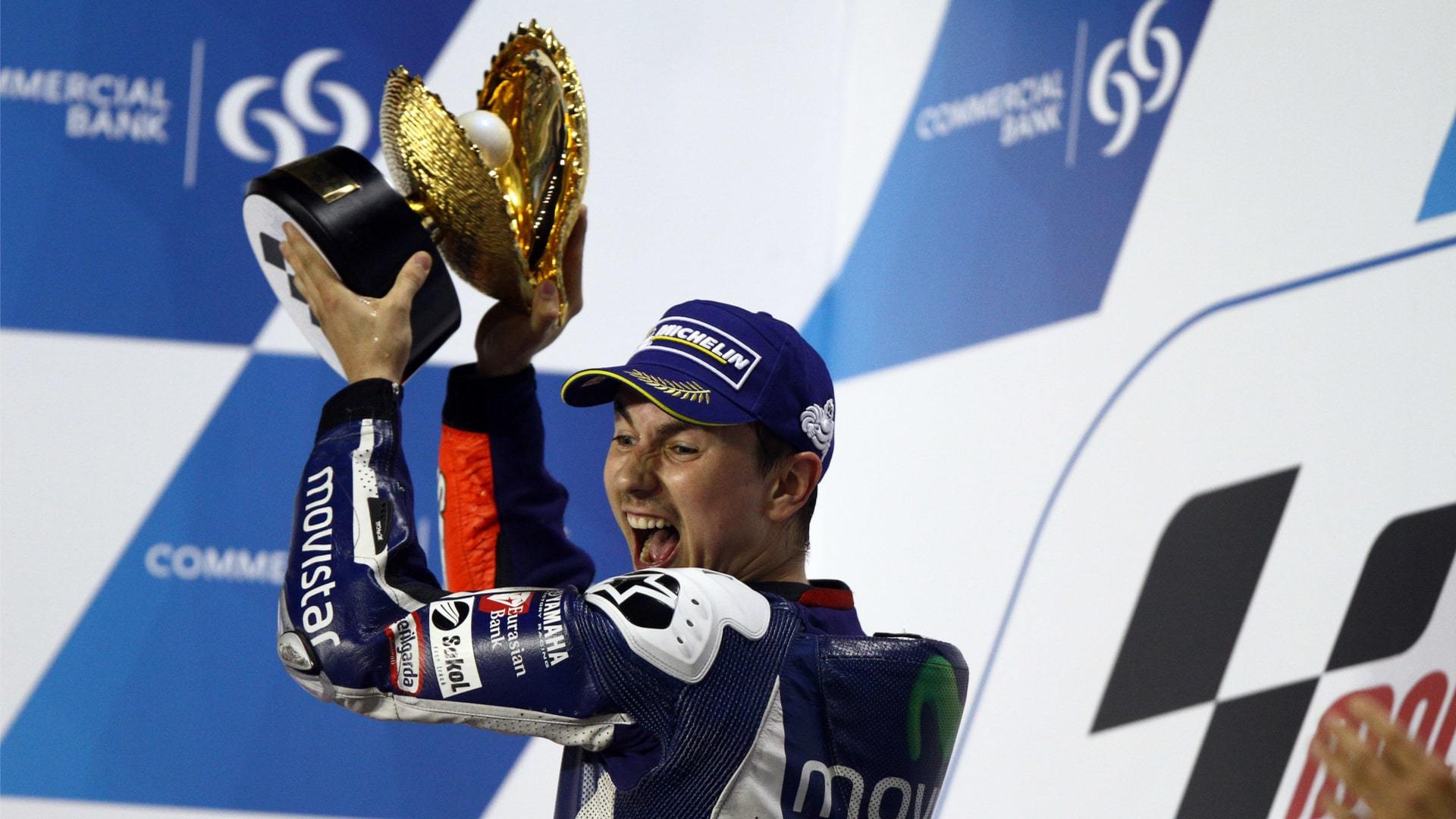 A Steep Career, Two Archrivals and Many Rendezvous with Death #

A banner year for Jorge, 2008 was the year he was signed by Yamaha in a lucrative deal that saw him racing for them for almost a decade. His rookie season was punctuated by ups and downs, but his future was certainly bright.

His highs included coming in first place at his third ever professional race, dethroning Dani Pedrosa from the title of youngest rider in the MotoGP class to finish on the podium in the first three races of his career (Qatar, Jerez and Estoril) and finishing the season ranked at a respectable fourth place, earning him Rookie of the Year. The downs were that he suffered from a number of injuries and several accidents, seven in three months, leaving him with broken bones and missed races.

That same year also marked the start of a simmering rivalry with teammate Valentino Rossi that spanned his entire career. Frequently, the two men were the other’s toughest opponents and the feuds they had were often very public and very nasty. His second season was marked by four wins and nine more times on the podium. He was determined to steal the World Championship away from Rossi, and this determination spurred him on all season, though he fell a bit short and wound up a still excellent number 2.

2010 saw #99 hitting his stride. He was the one to beat that year, and it was evident from the start that his goal was, yet again, to unseat Rossi. With an impressive nine wins and a record-breaking single season points total of 383, the most ever in a season of any racer ever, the young Mallorcan won that year’s MotoGP World Championships title. Rumours were, Ducati tried to poach him, reportedly offering him €15 million to go. 2010 was also the year Jorge Lorenzo started giving back. He became involved with Oxfam International and was praised for his support of Haitian earthquake victims.

The reigning champ went into the 2011 season with a new rival, the previous year’s Rookie of the year, Ben Spies. Jorge won three races, and had ten more podium finishes, but a serious accident where he nearly lost a finger ended his season early. Despite this, he still was seeded second in the world by season’s end.

2012 saw Jorge sign a new 2-year contract with Yamaha, retaining him until 2014. He also had a stellar season, beating out both Dani Pedrosa and Casey Stoner, for another World Championship win. Defending his title yet again in 2013 he had a great year, but injury cost him the title. He lost to Marc Marquez by a mere 4 points, a real disappointment for the Mallorcan.

After a slow start in 2014 and straggling way behind the first half of the season, he was back on good form at halfway point and had back to back wins, but it wasn’t all smooth sailing. He spent the entire season in a three-way competition with Dani Pedrosa and Valentino Rossi for not the top spot, but number two. Marquez had 2014 sewn up for the win.

A last minute decision by #99 to switch bikes in Valencia, where weather conditions weren’t ideal, he struggled with the new motorcycle and fell back to the point that he retired from the race. This left him in third place overall that year. Completely respectable, but not for someone with the heart of a champ. He acquired the nickname “X-Fuera” as well this year, because of the large red cross on his helmet, his ostentatious habit of overtaking on the outside and his energetic personal style.

2015 saw Lorenzo get his fifth World Championship title, but it was a hard fought win, with him taking the gold ring by only five points. 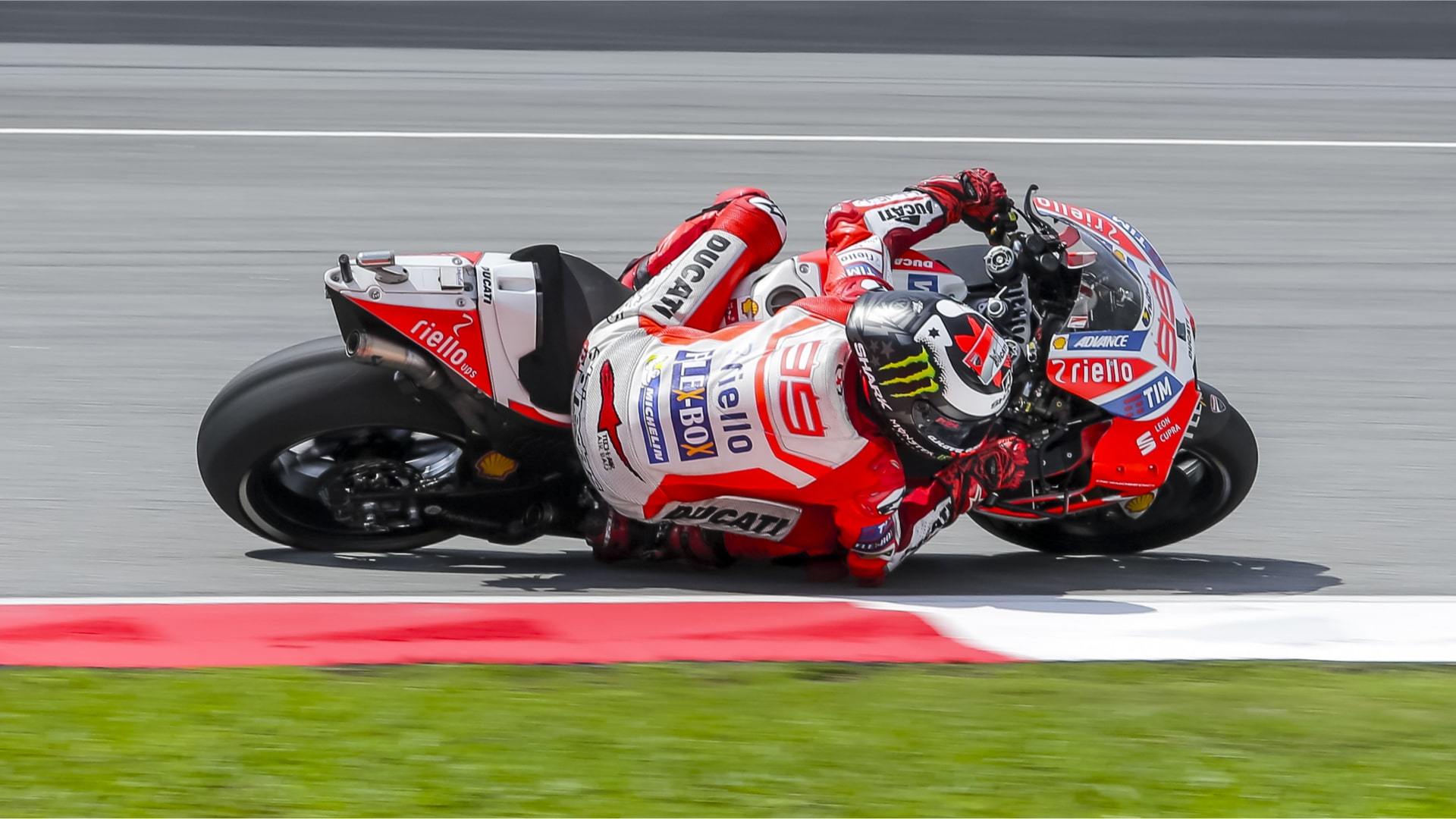 2016 was a year of inconsistency for the racer. He was all over the shop all season and ended up seeded number 2 for the year. He also announced he was quitting Yamaha. Ducati had finally secured him. His first year with Ducati seemed almost cursed. For the first time since before he had gone pro, Jorge didn’t have a single win in 2017 and finished a rather dismal seventh overall.

2018 wasn’t a lot better, though he did rack up some wins, but also injuries that took him out of several key races, leaving him in ninth place for the year. He announced his decision to leave Ducati and move to Repsol Honda in June. The move to Honda in 2019 was plagued with poor performance early on, but by midseason Jorge was getting used to the new bike and his style started to shine through again, though it was not reflected in the number of wins or even trips to the podium.

Things were looking up until the Catalan GP, where he made a decidedly dangerous hairpin pass on a corner, taking out three riders in the process, including former teammate Rossi. Not long after he took a fall in Assen and fractured a vertebrae, ending his season early and some think ending his will to compete. He announced at a 14th November press conference that he would be retiring from racing.

At the press conference, #99 explained his decision saying, “The truth is from that crash, the hill became too high for me, and even if I tried, I couldn’t find the motivation and patience to be able to keep climbing it. You know, I love this sport, I love to ride, but above all things, I love to win. I understood, that if I’m not able to fight for something big, to fight for the title or at least to fight for victories, I cannot find the motivation to keep going especially at this stage of my career. I realised that my goal with Honda, at least in a short time, was not realistic. I have to say I feel very sorry for Honda, especially for Alberto, who really was the one who trusted me and gave me that opportunity.” 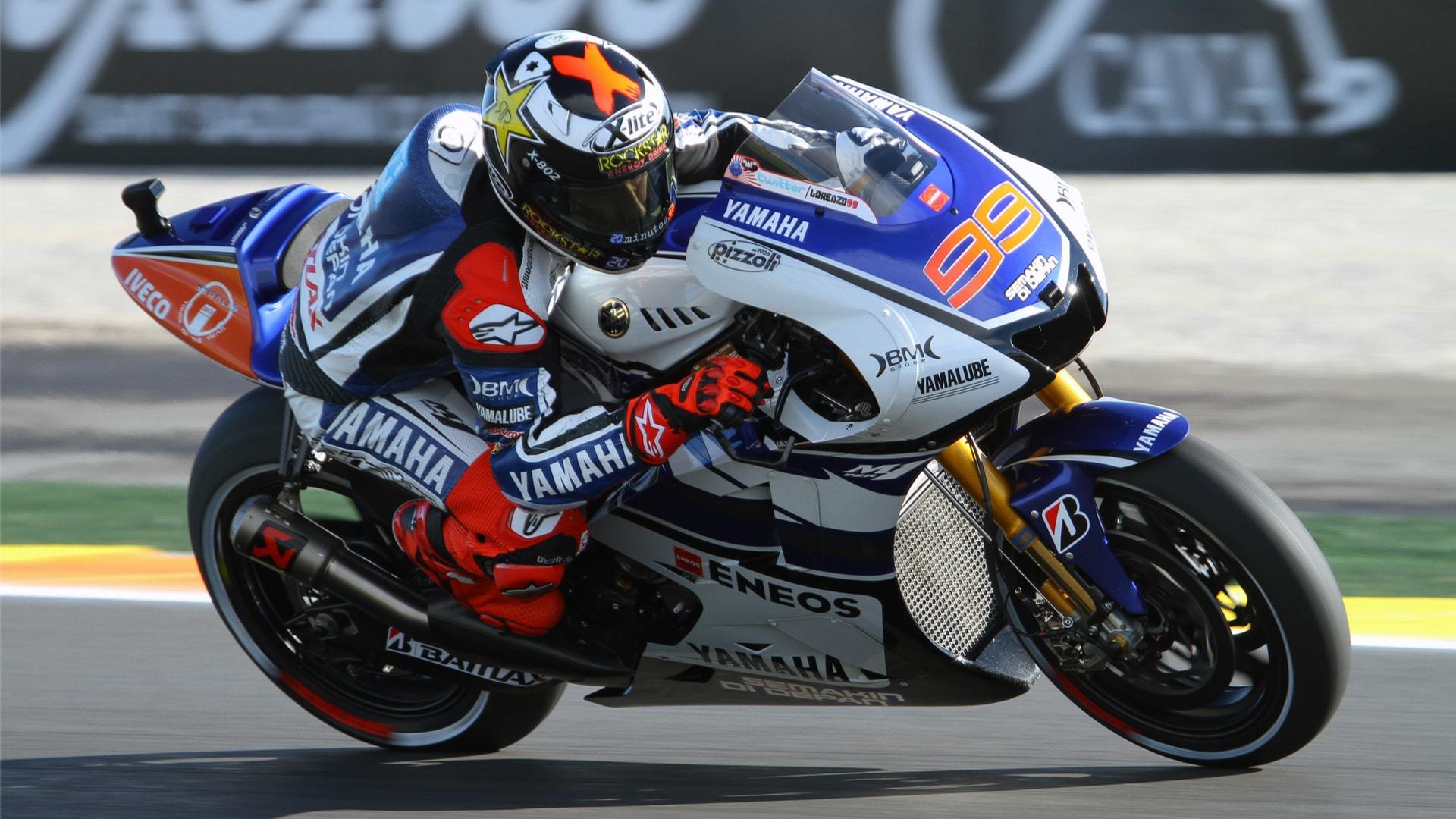 Since his retirement, the 32-year-old has picked up sticks and gone off on an extended holiday on the island of Bali, where it is clear he has been rethinking his decision.

An Instagram Q&A session he recently had saw a fan ask whether the world would see their hero back on a bike again. His response was a coy, “Soon”, leaving the door wide open for a possible comeback.

In the meantime, the five-time World Champ is enjoying his break from the action. Perhaps it’s to give himself a chance to fully recover from his many injuries, both physical and undoubtedly emotional, before returning to Europe to receive his induction into the MotoGP Hall of Fame as a MotoGP Legend at the Spanish GP in Jerez in 2020. A fine honour for this son of Mallorca and one of the greatest racers of all time.