An adventure isn't worth telling if there aren’t any dragons in it. ~ Sarah Ban Breathnach, Simple Abundance 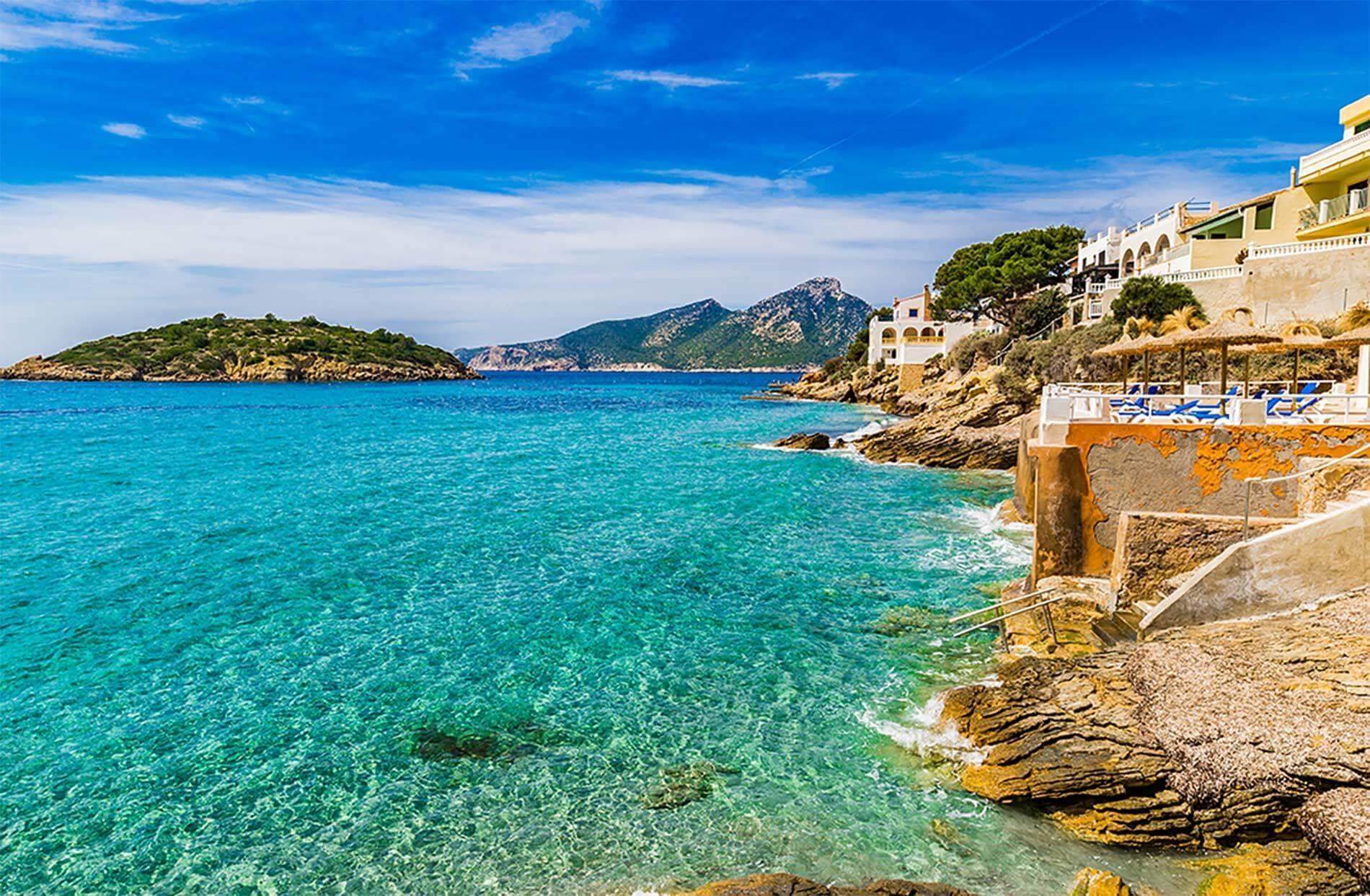 Flying in from the mainland of Spain, if look down, you’ll see Sa Dragonera. Whether you are dining in Sant Elm or hiking the 221, if you’ll gaze off to the west, you will see the island. It's our western point of reference. Uninhabited, it looks remote but this special island has a history, is ecologically important and you can visit it. 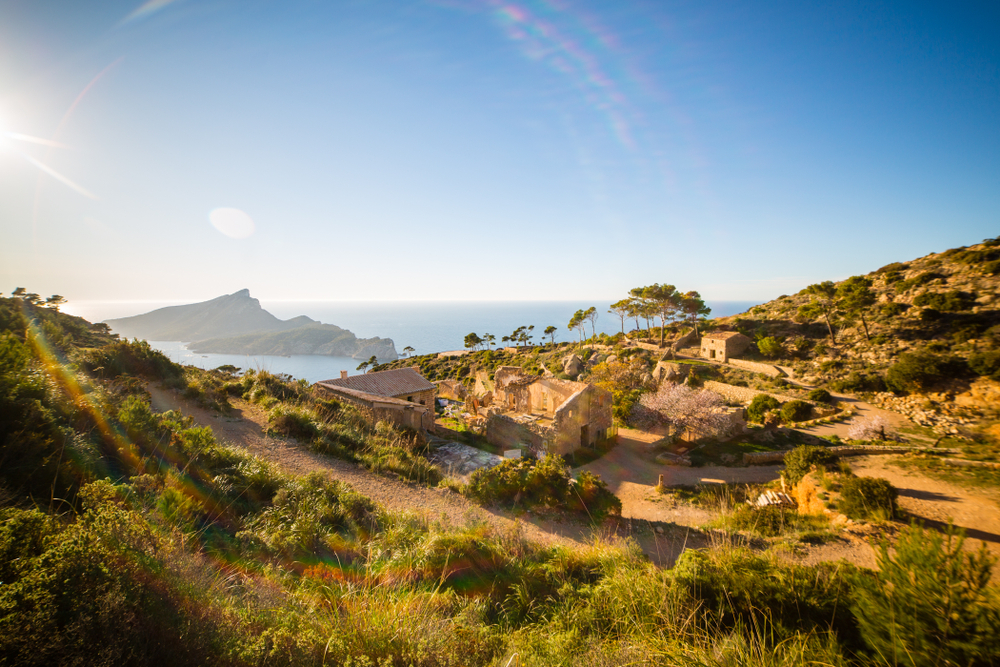 I’m sure you’ve figured out by now that the name Dragonera comes from Dragon. The island has a spectacular perspective from a distance and is shaped like a dragon. This place is home to large number of endemic Lilford's Wall Lizards. Once you are on the island, you’ll see an ancient Roman necropolis in the Es Lladó area, but there is no other sign of ancient settlements like you see in the Talaiots on the Mainland.

Two watchtowers were constructive as defensive lookouts to protect the island from Barbary pirates operating in the area from the mid-1500s to the early 1800s. In 1910, the lighthouses of Tramuntana (north) and Llebeig (southwest) began to operate, replacing the Faro Viejo or old lighthouse which was built in a lower part of the island where the weather produces a thick mist making navigating by ship dangerous.

In 1941, Juan Flexas bought the island for farming activities in the Es Lladó area; but, soon thereafter, smugglers began using the island for illegal activities. Given the influx of tourism and the larger ships, the lighthouse was automated and a lightkeeper and his family were the only permanent residents. 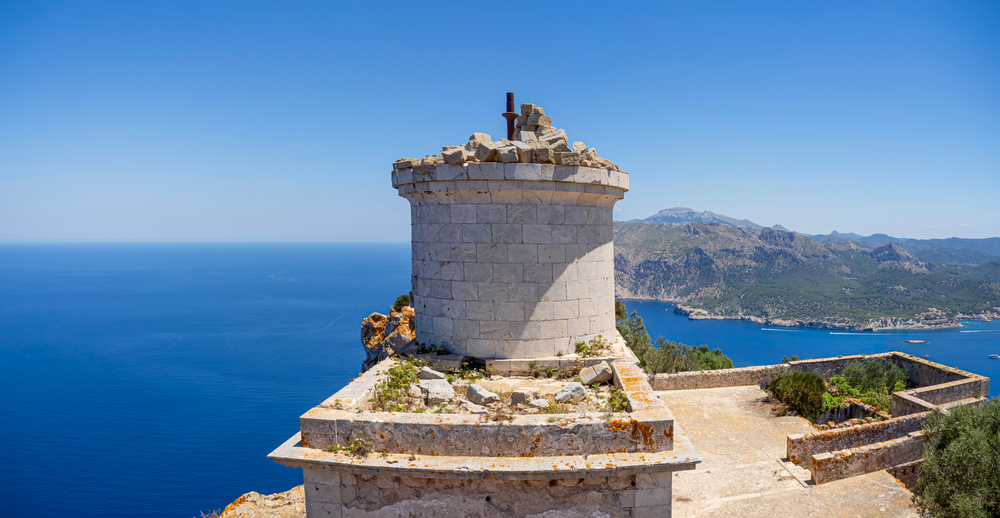 The island was bought to construct a tourist resort by a Spanish company in 1974. The original plan included a luxury residential complex, an hotel, a casino and a port for loading/unloading visitors. These plans were heavily contested by the ecologist movements and a harsh and long legal battle followed. See the video at the end of this article for a few historic photos of these protests and the passions that surrounded this period.

If you want more of a glimpse into the past, watch the 1982 film Evil Under the Sun, an adaption of an Agatha Christie novel by the same name. The island is the fictional Tyrania by the Adriatic. Then, in 1987, the Consell de Mallorca bought Sa Dragonera and, in 1995, the Balearic Regional Government declared "natural park" status along with the nearby islets of Pantaleu and Isla Mediana.

Cliffs line the northeast side of the island and provide an important ecosystem. You’ll see traditional Mediterranean species such as rosemary, heather, olive trees, buckthorns and dwarf palms.

The size of Sa Dragonera and its dry climate make this island exceptional for natural habitat. Sa Dragonera is home to 361 different plant species, 18 of which are endemic to the Balearics. The largest plant populations in the park are groves of wild olive (Olea europaea) and spurge olive (Cneorum tricoccon). Less extensive, though extremely diverse, are the plant growths that are found along the coast. The terrain of the cliffs provides the climate for these species with dew and night sea air helping to maintain temperate conditions.

As mentioned above, Sa Dragonera is home to an indigenous population of the wall lizard which is an endemic subspecies (Podarcis lilfordi giglioli) that cannot be found anywhere else in the world. If you look closely, you'll also see a particular snail species (Iberellus balearicus), which is also endemic to the Baleares.

For a truly life changing experience, try scuba diving around the island. To see more about this area and the underwater habitat, check out this article and click the video at the end to watch Sylvia Earle, an internationally renown marine biologist, explain why this truly is a Hope Spot >> Mission Blue - Mallorca’s Hope Spot 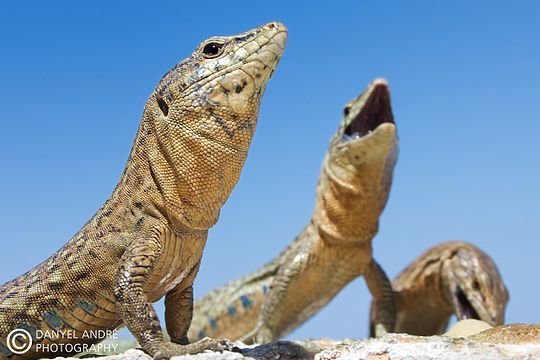 The Park’s list of catalogued seafaring birds is extensive and includes the Audouin’s gull (Larus audouinii) and the Balearic shearwater (Puffinus mauretanicus), one of the few birds that are endemic to the Balearic Islands. Among the birds of prey found here, Sa Dragonera boasts the largest Eleonora’s falcon (Falco eleonorae) population in the archipelago.

All of the other mammals found here (rats, rabbits and mice) have been introduced to the island and their presence is considered a threat to the indigenous flora and fauna.

The waters and marine floor are included in the Park’s area of marine influence, which contains a well-conserved array of underwater ecosystems representative of the western Mediterranean. Particularly worthy of note for their diversity are the Posidonia oceanicaprairies, a refuge for countless marine species and coral communities. - info. from Balears Natura 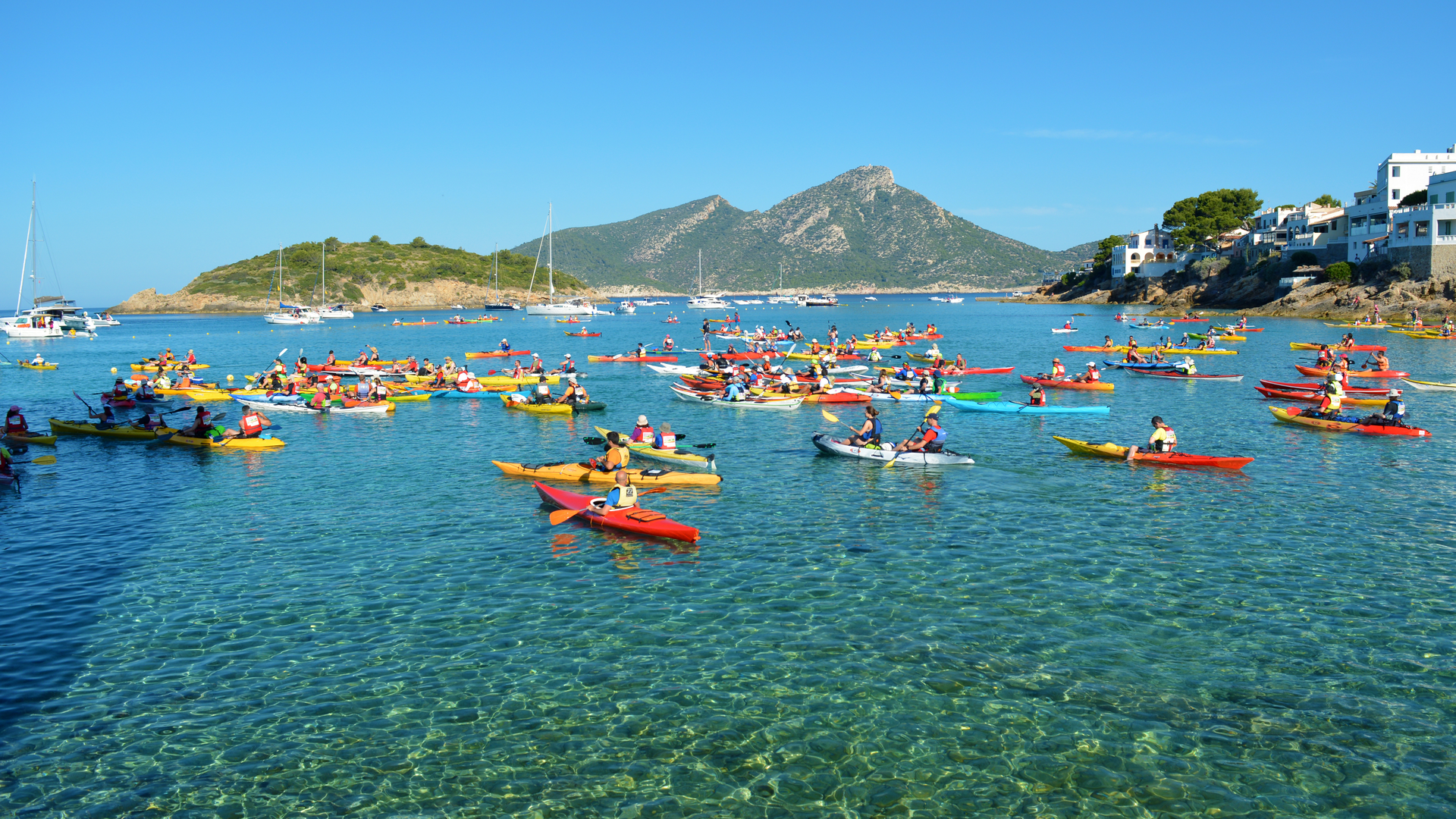 Geologically speaking, Dragonera is an emerged part of the geologic system running southwest-northeast in the Iberian Peninsula. This runs from the Málaga province through Cap de la Nau and then gets submerged under the Mediterranean Sea. It surfaces form the island of Ibiza, the Tramuntana Range in the island of Majorca and Sa Dragonera itself.

Sa Dragonera is approximately 3,200 metres in length and has a maximum width of 500 metres. Although its highest hill Pico Popi is only 360 metres high, the island's overall relief is very abrupt, especially considering its small size, which made the islet of little importance in historic times.

The island is a part of the municipality of Andratx, which is, along with Sant Elm (both in nearby Majorca), the closest towns to the island. Dragonera has a small natural port in the Cala Lladó area where the ferries dock. Looking at this photo below shows the majesty of the island for residents and visitors of Sant Elm. 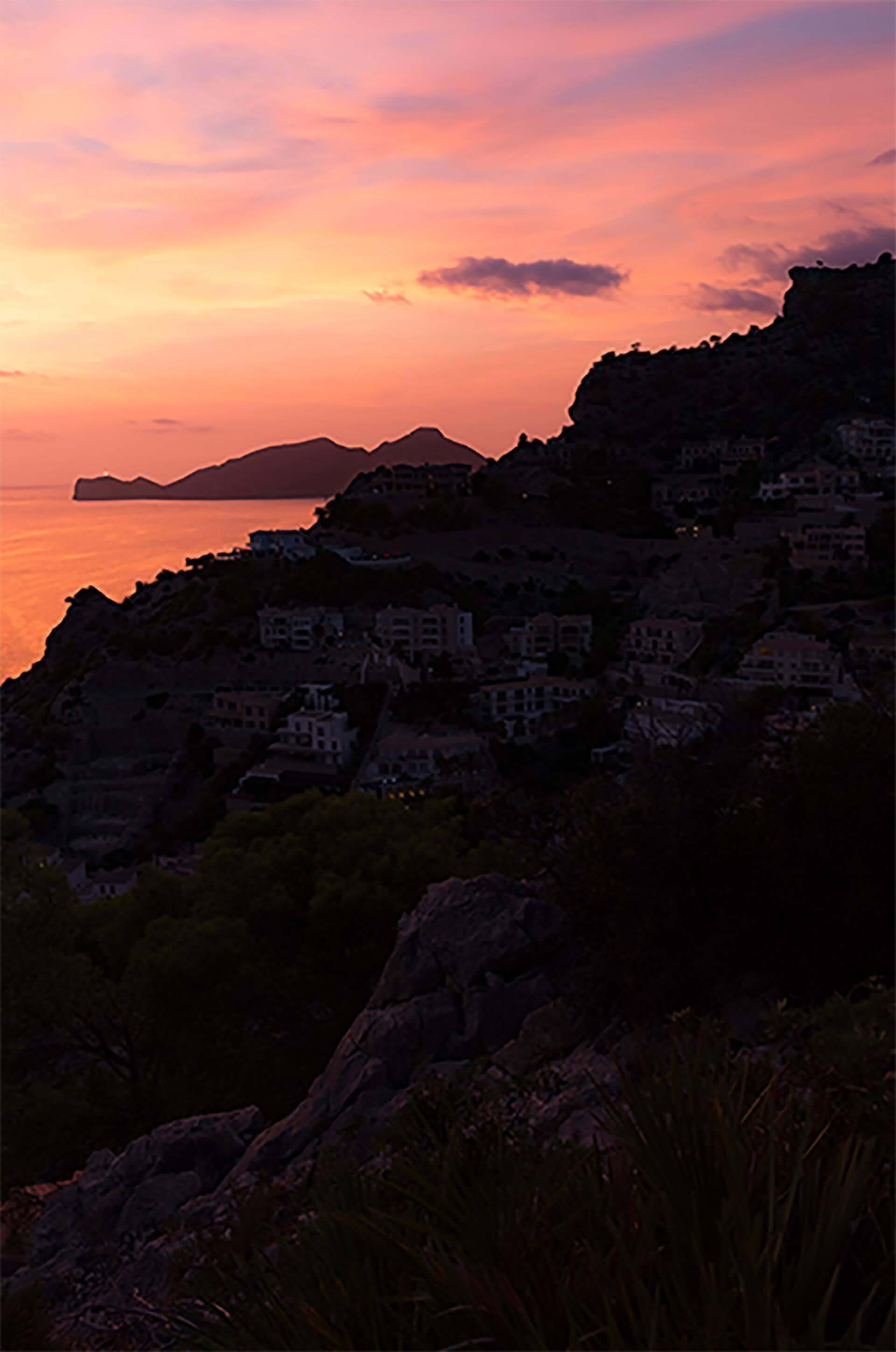 You cannot access Sa Dragonera except by private boat, kayak or ferry from Sant Elm or Port Andratx. If from Port Andratx, just go to the pier and look for signs. If from Sant Elm, in the Andratx District on the southwest part of the island, the boarding point for the ferry to Sa Dragonera is at the mollet de na Caragola, which is easy enough to find if you follow the pedestrian walkway along the sea until you reach the pier.

Here's a link to the ferry for more information: Ferry to Sa Dragonera

Look for Na Caragola, an authentic Mallorquin restaurant that offers local hospitality (read: kindness with professional service) with some of the best food on this side of the island. This isn’t the least expensive choice you can make for dining but it’s worth the splurge. The pier for the ferry is a short walk from the entrance to the restaurant

Mallorca has tremendous diversity in habitats. For the most selective tourist to the relaxed local, the island has something for everyone. And Sa Dragonera is cherished by both locals and visitors. If Natural Parks and habitat feeds your soul, this island is one not to miss.

Tour by IB3 and the Consell de Mallorca on the island - aerial images, getting there and trekking 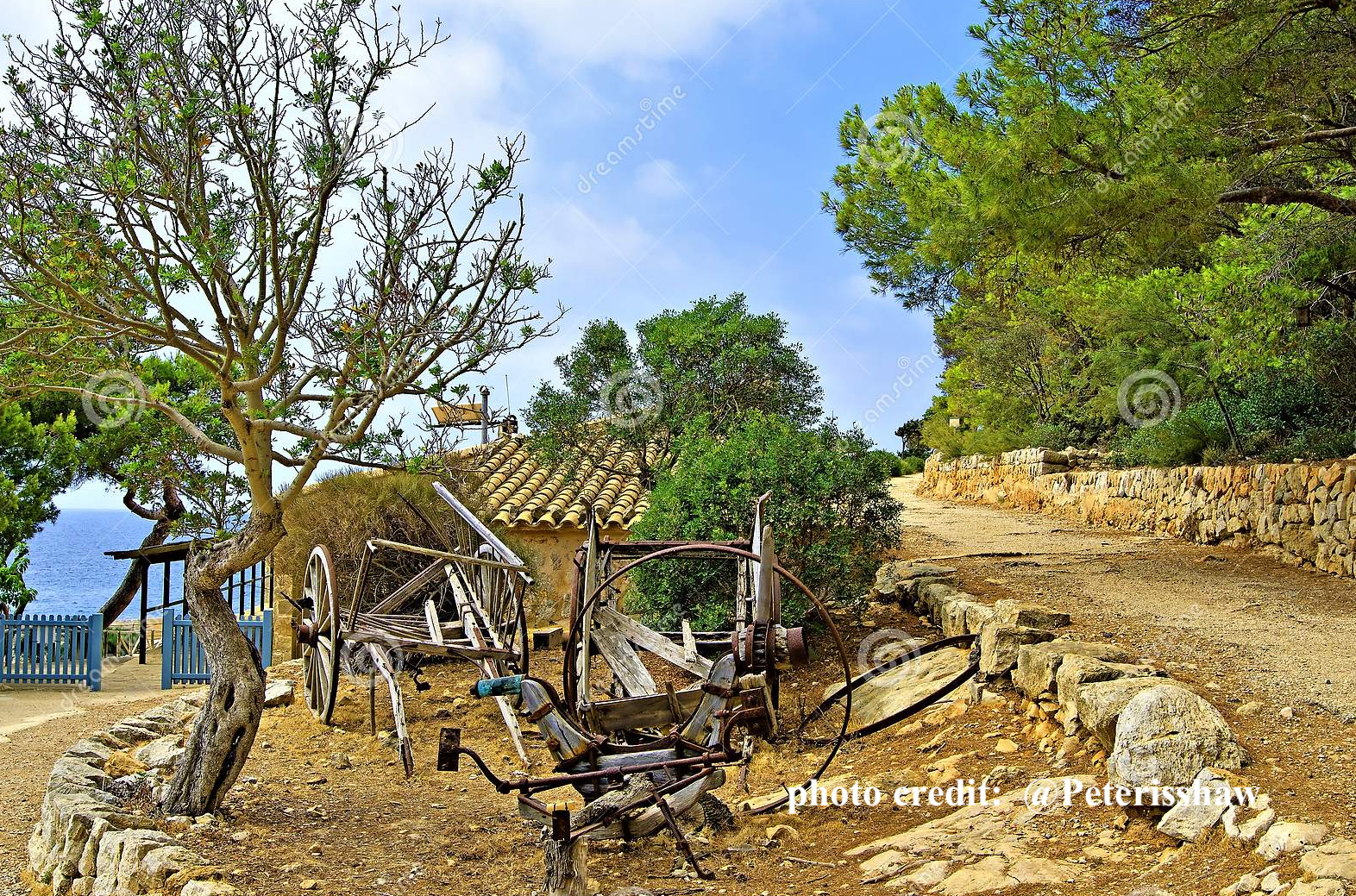