Recently, a number of scary reports about venomous snakes imported to the Balearics have made the round. Sensation mongering or the truth? Find out all about it!

The Good News: Whether recently introduced or endemic, most of Mallorca's snakes are relatively harmless. The only two venomous ones are of the colubridae family: the False Smooth Snake (macroprotodon cucullatus) and the Montpellier Snake (Malpolon monspessulanus). The fact that they have their fangs in the rear and not in the front of their mouths reduces the danger of venom injection. Also, their venom is of relatively low toxicity.

The Bad News: In recent years, Mallorca has seen something of a snake plague, with reptiles finding their way into villages and even houses in the search of mice and rats. And the truth is: non-venomous snakes can give nasty bites, too, leaving deep painful wounds which should always be treated by a doctor because of the risk of infection. 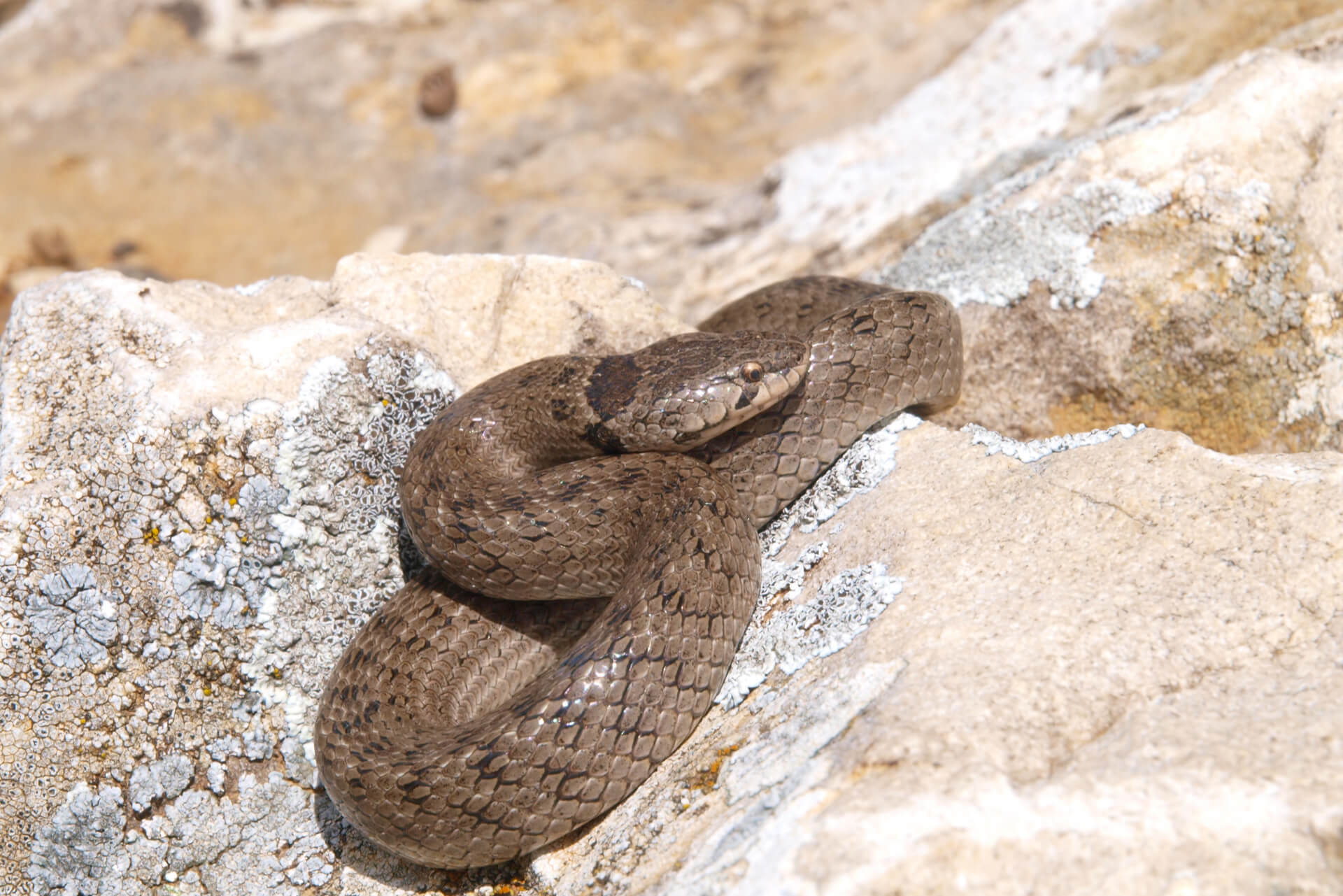 Originally, there were no snakes on Mallorca. Every single species we find slithering through the undergrowth was imported by humans, although in two cases this happened so many centuries ago that by now, they have earned themselves the name "endemic". Three new species, however, have found their way to the Balearics in more recent times. As the islands offer a lot of food and natural enemies are scarce, proliferation rates are indeed faster than one might wish for.

The government of the Balearics has declared war on the new arrivals, i.e. by setting up traps. As by now the reptiles have pretty much claimed the whole island, though, to get rid of them might prove an impossible task. Small chance we'll see the end of the "Snake Plague" news any time soon. 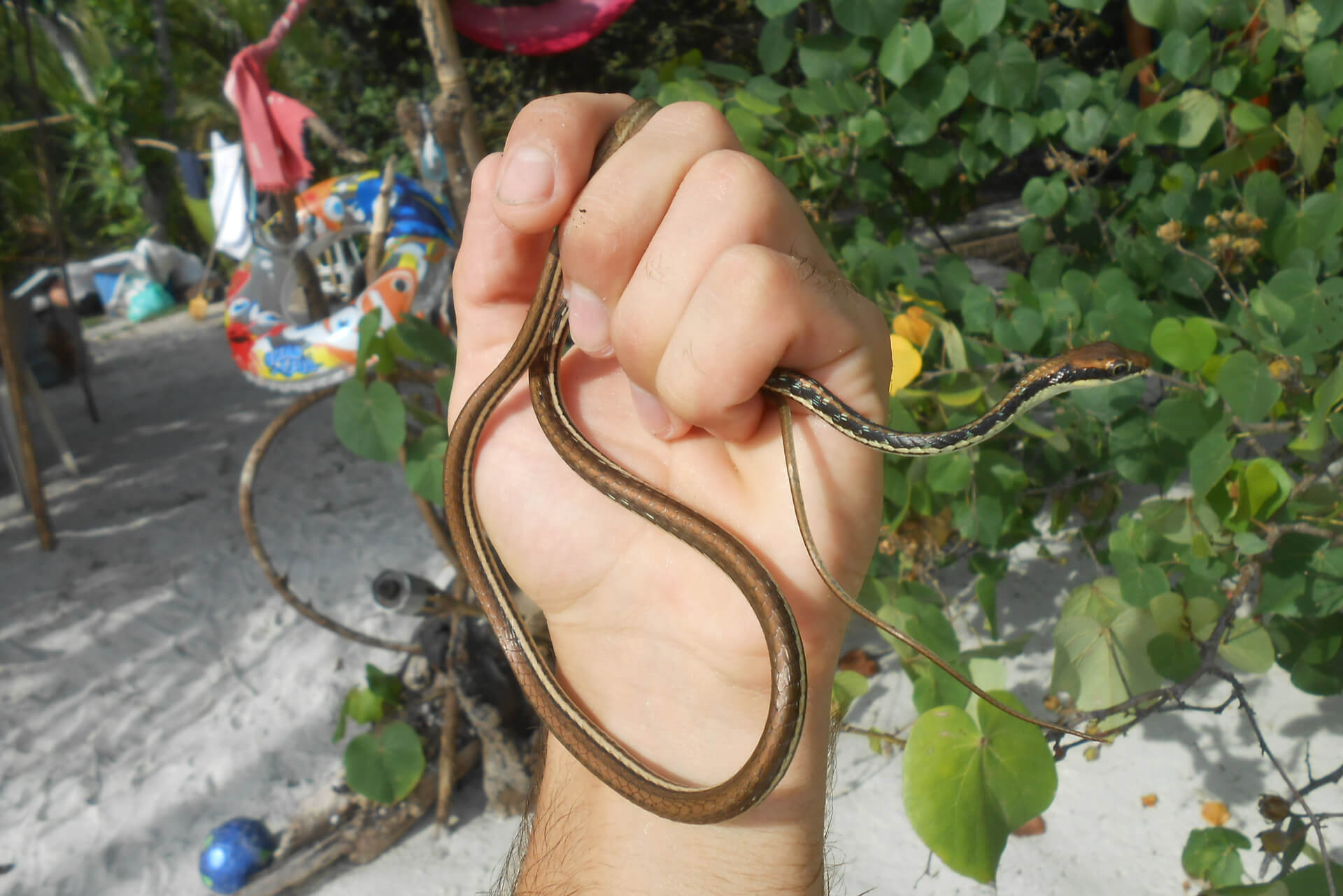 For many of us, the mere thought of an encounter with a snake is terrifying and so many a panicked call reaches the police emergency call centre. When this morning I found a snake writhing on my terrace with my cat sitting by ready to pounce, I was not sure how to react. So my question was: How big is the real risk?

The reptile guest on my terrace turned out to be a False Smooth Snake (see below). Good I locked the cat away! I caught it from a respectful distance with shovel and broom and sent it slithering off in the bushes.

As for the reports: The recently imported snakes do look fierce as they tend to be bigger than the endemic ones. Some of the specimen found measured 2 metres! However, you can rest assured: The three non-endemic snakes imported to the Balearics are all non-venomous.

Snakes to be found on Mallorca #

This approx. 50-centimetre long snake is a relatively common sight in rural Mallorca as it loves dry forests and shrubbery and the peace and quiet of abandoned fields or rural gardens like mine. It is venomous, but rarely attacks people - the snake is as scared of humans as (most) humans are of snakes and tries to keep its distance. Lizards are its likelier prey, but in case it does bite, no venom is injected in most cases as they have their fangs and poison glands way back in the rear of theirs mouth. Symptomatic treatment is normally enough as the venom is not very dangerous, but make sure have it properly treated by a doctor. If your dog or cat got bitten: Take it to the Vet immediately!

Viperine Snake (natrix maura)
Spanish: culebra viperina
An early introduction to the Balearics, this snake loves water and is a good swimmer. Fish, frogs and lizards are among its favourite prey. So, the risk to come across it anywhere close to human habitation is relatively small on this island – you'd have to go to places like the Albufera in the East in order to get across one.


Horseshoe Whip Snake (hemorrhois hippocrepis)
Spanish: culebra de herradura
Being introduced to the Balearics some fifteen years ago, this snake is among the recent additions to our snake population and seen not only on Mallorca, but on Ibiza and Formentera, too. Most probably the first of these reptiles reached the islands as blind passengers hidden in olive trees imported from the Spanish mainland. On Mallorca, with a length of up to 1.5 metres, they tend to be bigger than elsewhere – a sign that they find plenty of food here. So far, most specimen were found in the northeast, but more recently some were also spotted in other parts of the island. On Formentera and Ibiza, they have become a common sight.

Just as the False Smooth Snake, new arrival number two, the Montpellier Snake, is also not very dangerous to humans as it also has rear fangs and not front ones. Endemic to the costal regions around the Mediterranean (e.g. Spain, South of France, Morocco), this reptile is still a rare sight on the Balearics. First spotted on Ibiza in 2003, it made its first appearance in the Capdepera area of Mallorca in 2011. No more than seventeen overall sightings were reported since it reached our shores, so to talk of a plague … well not really.


Ladder Snake (rhinechis scalaris, also elaphe scalaris)
Spanish: culebra de escalera
Most probably, this last of the new additions to the Balearic's reptile population also made it across the Mediterranean in the hull of a freighter. It may not be venomous, but neither is it harmless. If it feels attacked it reacts fiercely and bites hard. So, better not try to catch it! Keep well out of its way. And in case an accident does happen: Go see a doctor and make sure the wound gets properly disinfected.

Walking Tour at the Vulture Sanctuary