The little town of Petra in the Pla de Mallorca region might seem like a sleepy little place tucked well away in the backwaters of the island – but one of its sons was influential enough to leave an impact on the world: Junípero Serra was born here in 1713.

His original name was Miguel José Serra until he became a Franciscan friar in 1730 and took the name of Junípero. In his hometown, the church where he was baptised – Sant Pere – and the convent San Bernardí where he attended school as a child have virtually been kept unchanged since he left almost three hundred years ago.

Not far away is the Ermita de Bonany, a small chapel where Pere Juníper, as the locals call him, gave his last sermon to the villagers before he went on his big quest, leaving Mallorca for New Spain in 1749, which is why many Americans know him from the history books:

In his honour, a statue was erected in the Capitol in Washington, and in California, many schools and a freeway bear his name, and Ronald Reagon took his oath of office on his bible.

Pope Francis called the friar "the evangelizer of the West in the United States" and raised him to sainthood – a decision that has sparked some controversy, some seeing Serra as a saint, others calling him a villain for allowing terrible atrocities to happen to the Native peoples of California committed by Spanish soldiers. See this video to hear both sides of the story: 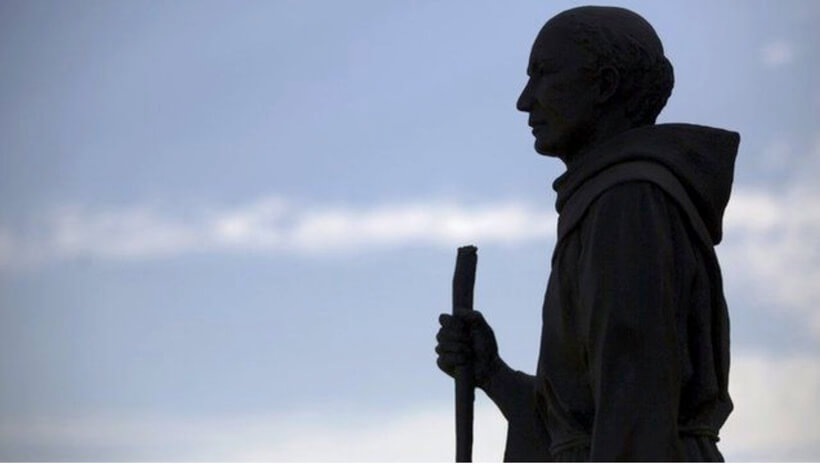 Back home however, most "Petrers", as the locals are called, are proud of their famous son who was beatified by Pope John Paul II in 1988, and when he was canonized in 2015, many gathered in church to watch the screening of the ceremony which made Serra the second Saint of the island after Catalina Tomàs from Valldemossa.

A museum of Junípero Serra’s life is located in his childhood home in Petra. Casa Museu de Fra Juníper Serra was opened in 1959.