An overall of 464,223 properties were sold in Spain, 15,750 of which in the Balearics. With the Brexit in mind, we wondered how many of those are British Nationals?

Here are the facts: According to official figures published by the Spanish Registry for 2017, overall of 464,223 properties were sold in Spain, 15,750 of which in the Balearics. With the Brexit in mind, we wondered how many of those still go to British nationals? Here are the facts from the latest official annual figures.

The good news first: According to Spanish Registry statistics, the British continue to rank first among foreign markets for Spain as a whole.

The 5 Most Important Foreign Markets for Spanish Properties #

It is true. Brexit fears do seem to take their toll judging by the British decreasing market tranche we saw over the past few years: from 21.34 per cent in 2015 and 19 per cent in 2016 down to 15.01 per cent in the latest statistics. More on this later.

On a more positive note though, absolute figures paint a brighter picture. As compared to more than 10.100 sales in 2016, more than 9.100 compraventa contracts were signed by British nationals in 2017, which, according to the Registry's Statisticians, points to the fact that the nearer we get to the Brexit date, the slower the decrease becomes. They even report a certain recuperation of the market in the last trimester of the year. This latter aspect is of particular relevance as, with a view to the British being the number one ranking foreign buyers in Spain, a recovery in both absolute and relative figures would point to an growth of the Spanish real estate market as a whole.

This is really good news as the number of properties bought by the French more than made up for the reduction in sales to the British.

The Canaries and Balearics are by far the most popular areas for foreigners to buy property, accounting for more than 30% of all sales.

Here, on this Island, German buyers by far outnumber all other nationals anyway. So wherever BREXIT will take us: If you put your property on the market, you have a good chance to sell! 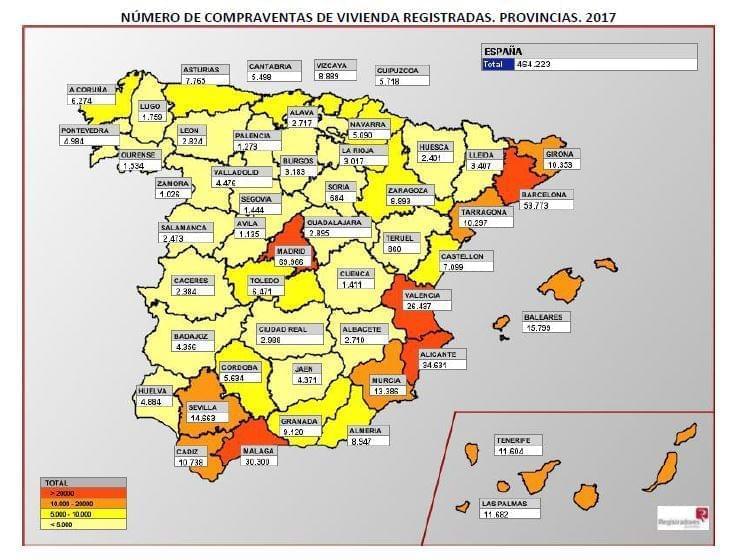 Find A Home On Mallorca