Editor's Note: This is the short tale of a retired deep-sea diver's 2017 long-day's voyage on his new powerboat, the ARTEMIS, from Estratit to Port Andratx, with a few facts and figures at the end! We are reposting to offer ideas for activities during our continuing slowdown with COVID.

Having bought a beautiful Cranchi Endurance 41 last year, from a boatyard near Barcelona, the next big decision was where we could get the most fun out of it. The western Mediterranean is far less interesting than Italian coastlines and those further eastwards, Croatia and Greece, so the Balearics looked like a great starting point. Of course, having family in Andratx was the added attraction.

We drive down from our home near Paris, car full of diving equipment, vital supplies (bottles of rosé, favorite coffee beans, perfect croissants, poulet rôti etc.), wife and whippet, decant everything into Artemis and spend the night fine-tuning plans for the trip. It's early June. Weather delightful. Come midnight, a storm rocks the boat. Noise in the marina sounds similar to a thousand metal drums banging with wind howling through the halyards and all idea of sliding away on a calm misty dawn departure vanishes. 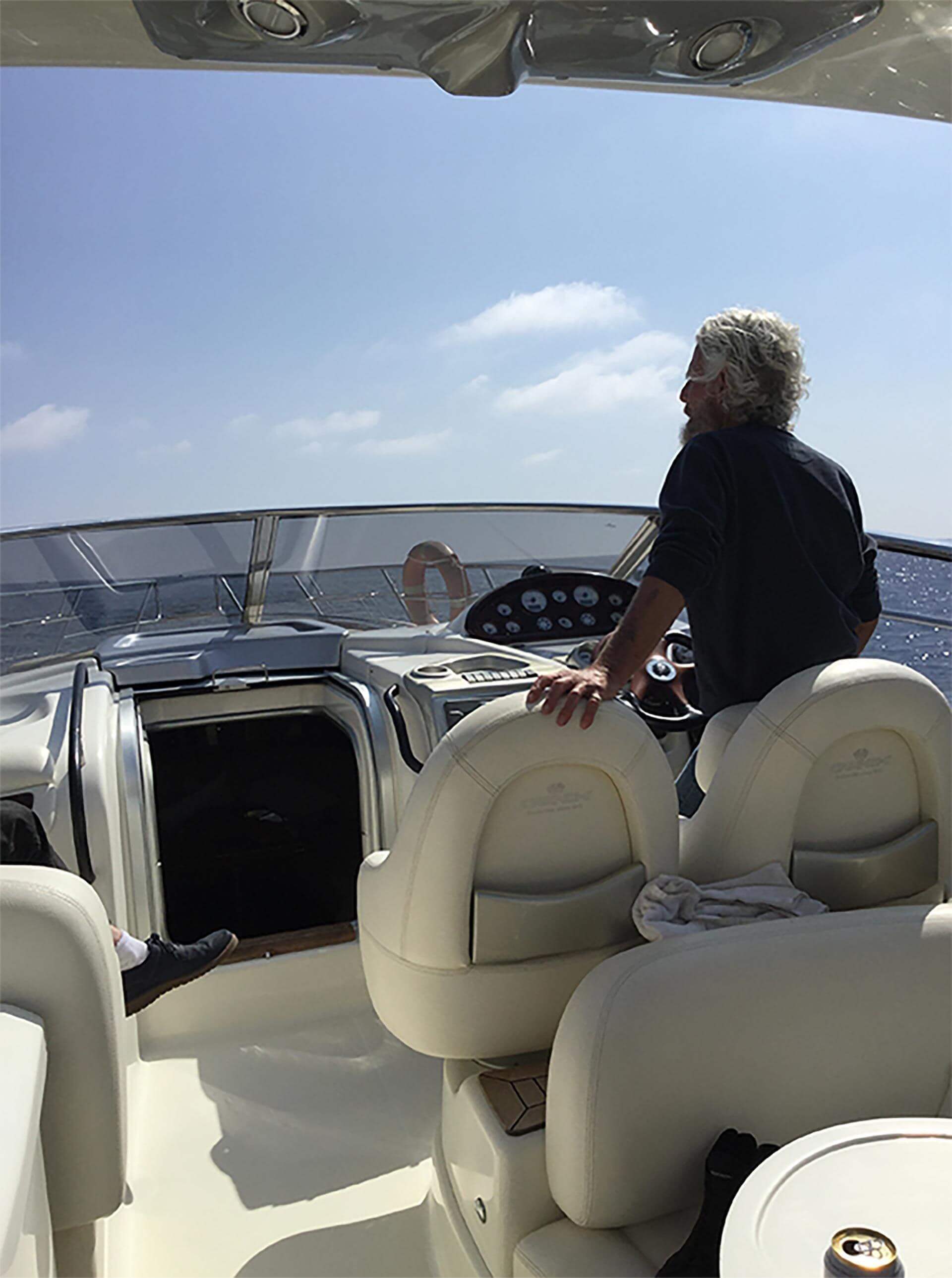 Over a bouncy breakfast Plan B is hatched. Wife and hound will take the day ferry to Palma. Which actually works better as we'll have a car in Mallorca, rather than having to hire one. I begin to think she's arranged the storm as there was a small mutiny brewing amongst the crew, at the thought of eight hours bumping across the Phoenician Lake, with modest chance of not arriving in Tangiers a lot later.

Another night trying to sleep whilst wondering whether the wind had lessened, peering at the Accuweather charts, hourly updates, willing the little arrows to stop swirling around in triplicate, become single orderly indicators of peace and quiet, preferably blowing Artemis gently south and a tad west. We wake up, the sky has cleared, seagulls are gliding not flying backwards. We let the hound run on the long empty beach, have breakfast and decide to go ahead… today's the day. Now or never. Wife kisses self in very kindly fashion, my dog looks guilty. They leave, with an air of relief. But I'm glad to have the boat to myself. It may be a difficult trip, better without worried or sea-sick wives and whippets.

Fueling For the Voyage #

I motor to the Repsol quay, fuel her up. 700 litres. About €800 plus. I've calculated distance, speed, consumption, and have to be confidant the maths is correct or I'll be in trouble. One thing about powerboats, no back-up. No sail to hoist. Duvet cover on satellite dish may not be sufficient.

Out in the Bay of Roses, skirting the Illes Medes, a marine conservation area created by Jacques Cousteau, the sea had a silky sheen, pewter grey, slight swells, a rhythm that suited Artemis, so I opened her up, began to plane and enjoyed the next couple of hours, thinking it was going to be smooth sailing. Dinner at Es Moll. Arrive before wife, looking suave and cool. Happiness all round! 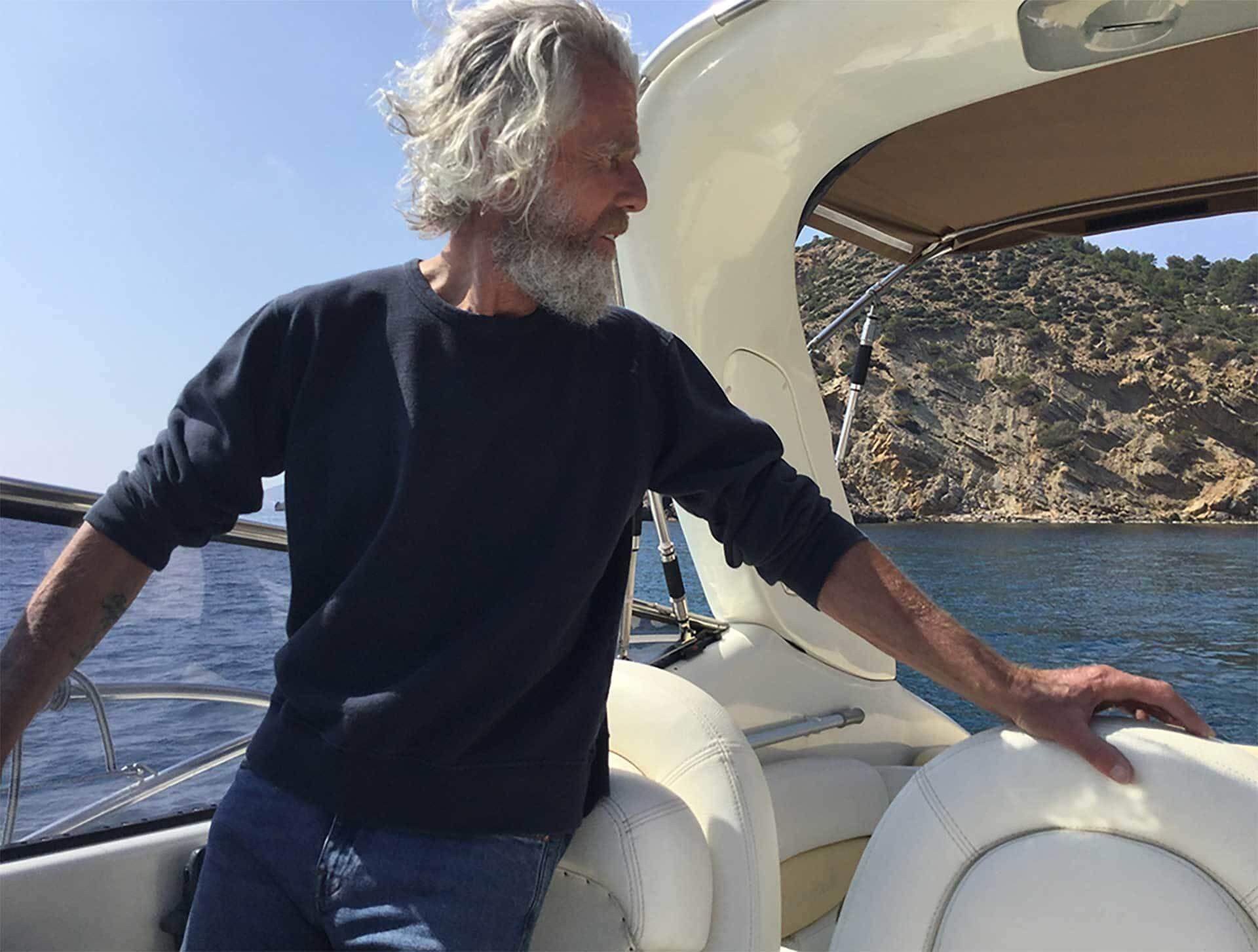 Somewhere in the Middle Of the Mediterranean #

Banks of morning cloud long gone, it started to heat up. Brought up in the tropics and working in India for many years means I have a tough hide, don't need shade and was happy without the canopy. I ditched the jeans, opened a can of icy lager, switched on the auto-pilot and fiddled with the radio, the charts, made a snack, stretched out, one eye open for ferries, oil tankers, whales and billionaires' yachts. We'd seen two whales breaching on our last ferry trip, just by chance, taking a sunset turn around the deck before going below. The spouting spray from their blows holding rainbows, a magical image. I was actually thinking about that when more magic happened. A pod of sleek dolphins appeared, wild smiling jokers, racing Artemis, flying and diving alongside her hull, skimming the surface as I sliced through the waves. I might have been feeling lonely, or rather that sense of being a small human, alone in the context of Nature's vast spaces because I was uplifted by their presence and sheer joy of existence. They only stayed with me for a few minutes, yet altered the way I was feeling about the long day ahead. All journeys have their bright, engaging moments and this had been a nice omen. Which was good because by midday the trip began to get considerably more challenging.

There had been two hurricanes brewing out in the Atlantic, an extremely unusual occurrence for June. Somewhere in their dying moments Arlene and Cindy held hands and whistled through the Straits of Gibraltar, playing a game of havoc-to-shipping in the way that even normal weather patterns, in this particular coastal area between mainland Europe and North Africa, have a tendency to do, often appearing from nowhere. Fast! My father-in-law had been dismasted here on his voyage from England to St.Tropez many years ago. Missing for three days, radio-mast gone, old-style communication failure, he was towed to port by the coastguards. Mindful of that I realised it was getting very choppy, long cross-swells, strong currents and rising wind taking their toll. I slowed down, first to 25 knots, then levelled both engines at 17 knots. Four hours of this was quite hard going, physically and mentally. But out in the Middle of Nowhere there's only one way to go! At least it wasn't raining or cold.

There had been a sea-mist for a while, glowing golden, diffusing the strong sunlight, which was welcome by mid-afternoon. The swells subsided, waves agreeably changed direction, sending me steadily south. I went into the galley, made a mug of tea, foraged for biscuits. Then realised that chaos ruled. Even though everything had been stowed away, the constant crashing downwards, at speed had shaken shelves, fascia, cushions, books, and most bizarrely, battery-lit candles from IKEA all flickered happily, as if at the Mad Hatter's Tea party. I abandoned the cabin and went back to my Captain's chair. Sat down, suddenly tired. Then, straight ahead, the mist cleared and I saw a great cloud hovering over the soaring mass of the distant Tramuntana.

I was enchanted. Pleased with the sheer brilliance of the day, my voyage, my charts, preparations. With the realisation that my Yachtmaster's certification was as good in fact as on paper. All was well. Ah, but not quite. I'd kept my eye on fuel levels, watching both gauges dropping faster than expected. Heavy weather uses up more than one anticipates, and I had to make a choice, quickly. Adieu, euphoria. Either to put in at Sóller or take a chance, head straight for Port Andratx. I chose the former, swinging into the bay at about 3.00 pm. Hour of the Universal Siesta. Open at 4.30, read the sun-bleached sign. Silence, after hours of roaring Volvo Penta engines, engulfed me. Calm lapping water, peace. A welcome rest, in fact. I called my wife, who uncrossed her fingers and was deeply admiring that I wasn't in Ras Hamidou exporing the Roman ruins, or worse, say Tunis... and waited until a sleepy marinero arrived to refill the tank.

The beauty of cruising slowly down Mallorca's western flanks cannot be underestimated. The sheer cliffs, haunt of gulls, shearwaters and even black vultures, are sentinels to Time. The weathered crags, heights covered with tenacious shrubs and lichens, usually cast deep shadows, except now, as facing west the endless June sun burns not just me but the soaring rock face, baked sienna and ochre colours, a most Mediterranean palette. Tiny inaccessible coves. Caves, washed by small waves. Here and there a hint of dwellings, then a hidden village. Port d'es Canonge. Banyalbufar. Cala d'Estellencs. A long barren stretch until Sant Elm, Dragonera, sleeping as good dragons do, guarding the entrance to Port Andratx

I radio ahead. Am given a berth, two marineros arrive on bikes, guide me in. Pick up the lines, help tie Artemis up. I obviously look like the Ancient Mariner and am treated with reverence. The Club de Vela is packed with boats, the port full of life and music, cars, people. I'm still somewhere out at sea, alone with the elements, rising and falling with the motion of the boat. But I've arrived. It's been an adventure. I'd do it again. Just a question of taking the time!

For now, Mallorca's a perfect base. There's a lot of coast to explore and - best of all - a 6-year old granddaughter intent on driving a big powerboat to the nearest cove, where she can jump overboard and snorkel with fishes.

POWER. Volvo Penta: Twin engines, economic cruising speed 25 knots. Can reach 35- 40 knots, when necessary. Fuel consumption based on 20-25 knots. Because of the weather Artemis used up more than expected.

INSURANCE: A Cranchi Endurance 41 is an exceptional model from the famous Italian Cranchi company, started in 1870, in Lombardy. Artemis, built 2007, is insured through ALLIANCE for 800 € p.a. Costs of boats vary, depending on make, year constructed, condition. Finding a good agent, with warranties and maintenance contracts is essential. As is a survey.

MOORINGS: This becomes complicated. Various fees apply, each marina has different criteria. However, based on Port Andratx marina being one of the most expensive on the island one can find an average price by shopping around. I wintered ARTEMIS on hard standing with ATLAS MARINE, who then put her in the water in April and took her out at the beginning of June, when we returned to France. June-August fees are prohibitive, long term; but if one frees up one's mooring during those months the annual rental is roughly 5,000 €. There's many options for mooring, but having electricity and water is really a necessity, plus hi-tech security of a good marina, rather than anchoring outside the moles.

COVID19 Is It Safe to Fly to Mallorca